For ticket information, contact Renee Dekker at 209-386-6644 or renee.dekker@mccd.edu, or visit mccd.tix.com.

February 25, 2020 - For the first time ever on campus, the Merced College Theater & Performing Arts Department will perform the Rodgers & Hammerstein musical “The Sound of Music” come March 20-29.

The legendary musical is also the first collaboration between the Theater and Music departments at Merced College. Theater instructor Lauren McCue-Bryx is directing the production. Music instructor Alex Simon is in charge of musical 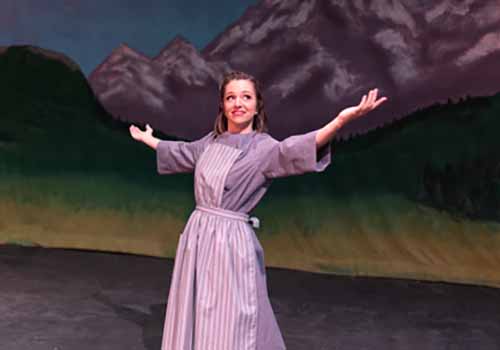 “With the Sound of Music we wanted a production that could appeal to community members of all ages,” said John Albano, Dean of Fine & Performing Arts at Merced College.  “This is one of the largest productions we have showed in some time, particularly regarding the collaboration between our theater arts and music programs.”

The musical tells the story of the von Trapp family. The children are being raised by the stern widower Captain von Trapp. All of their lives are forever changed by the arrival of the effervescent Fräulein Maria.

The story is set in Austria in 1938 right before and during the Nazi annexation. The music features some of the most enduring show tunes ever produced including the eponymous theme, Climb Every Mountain, My Favorite Things, Do-Re-Mi and Edelweiss.

The Merced College cast has 28+ members and features Merced College students, young children and other community members, including professors from UC Merced and Cal State Stanislaus.

The production will feature live music, something the theater department hasn’t done for years. They haven’t had the right musical to really exploit that capability in many years.

“Part of the challenge was finding the right music director,” Albano said. “It all came together with the Sound of Music. When we had the opportunity to secure the rights to perform the show, we discussed it as a real possibility and everyone got very excited. We now have great directors, and the right show at the right time.
Source: Merced College