June 29, 2020 - WASHINGTON – The Bureau of Land Management (BLM) has announced that the Secretary of the Interior has transferred 37 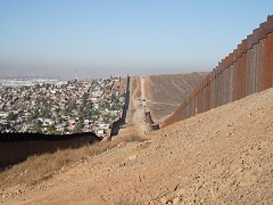 acres of BLM-managed federal public lands in San Diego County, California along the southern border with Mexico to the Department of the Army. The transfer will facilitate construction and augmentation of barriers along border to deter illegal crossings.

The Army requested transfer of these and other federal lands following Presidential Proclamation 9844, issued by President Trump on February 15, 2019, which declared the situation at the southern border a humanitarian crisis that threatens core national security interests. The requests followed the Defense Department announcement on September 4, 2019 to defer $3.6 billion to fund 11 barrier projects at our southern border. In accordance with this proclamation and federal law, the land will be re-purposed for military construction projects.

“The BLM has made it a priority to work closely with the Departments of Homeland Security and Defense to help them avoid and minimize impacts on wildlife, natural and cultural resources that occur on the lands we manage along the border. Where impacts can’t be avoided, DHS and DOD have demonstrated their commitment to mitigating them,” said BLM Deputy Director for Programs and Policy William Perry Pendley. “This latest action demonstrates that partnership.”

In September 2019, Secretary Bernhardt approved the transfer of approximately 560 acres of Federal lands to the Army to build roughly 70 miles of border barriers. This included 44 acres in San Diego County. In May 2020, the Army determined that the additional 37 acres of public lands in San Diego County will be needed to facilitate construction of a road network providing access to the border barriers being constructed on the previously withdrawn lands.

The additional transfer will extend the existing withdrawal area by 300 feet for a total area of 500 feet lying parallel with the international border between the United States and Mexico. No national parks nor segments from Indian country are included in the land transfer.

In addition to security concerns, this transfer also responds to environmental issues caused by unlawful border crossings. The BLM is committed to protecting multiple species that have been affected by land degradation and destruction caused by the creation of trails and the deposition of trash. These include sensitive and protected species such as the Flat-Tailed Horned Lizard, Burrowing Owl, Least Bell's Vireo, Southwestern Willow Flycatcher, and the Quino Checkerspot Butterfly. Construction of the border wall will reduce or eliminate these impacts.
Source: BLM