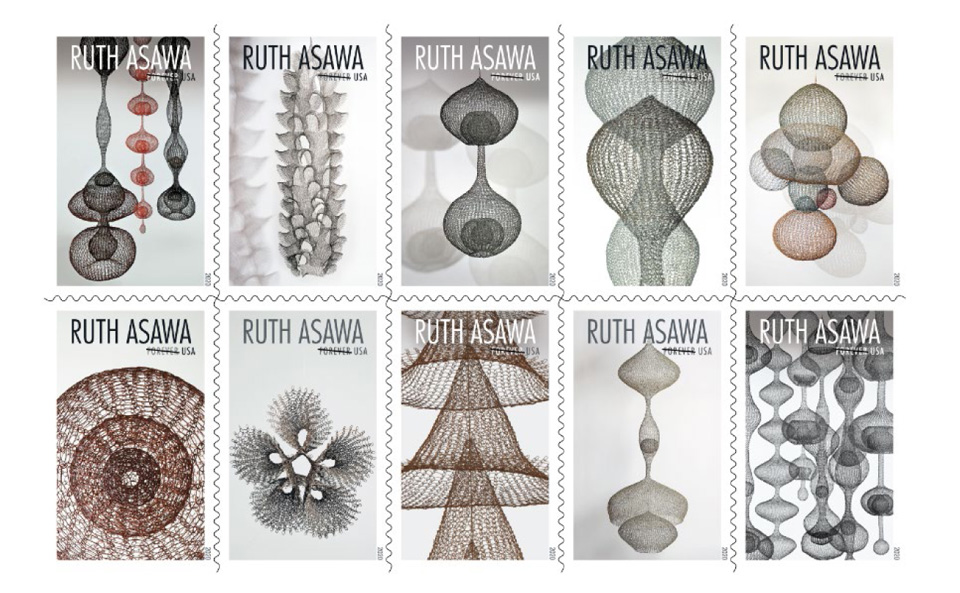 August 17, 2020 - WASHINGTON, DC — The U.S. Postal Service has issued the Ruth Asawa commemorative Forever stamps. The stamps were dedicated in a virtual ceremony and are now being sold at Post Office locations nationwide and online at usps.com/ruthasawa.

“The Postal Service takes tremendous pride in its stamp program, which celebrates the very best of American life, history and culture,” said dedicating official Sharon D. Owens, vice president, Pricing and Costing, U.S. Postal Service. “Today we’re dedicating a new stamp set that honors the groundbreaking and iconic works of Ruth Asawa — one of the greatest American artists of the past century.”

Owens was joined for the ceremony by Paul Lanier, son of Ruth Asawa; George Takei, chair emeritus of the board of trustees and founding member, Japanese American National Museum; and Jonathan Laib, director, David Zwirner . The virtual stamp event can be viewed on the Postal Service’s Facebook and Twitter pages.

Showcasing Asawa's wire sculptures, the pane includes 20 stamps, two each of 10 designs, featuring photographs by Laurence Cuneo and Dan Bradica for David Zwirner. The selvage features a photograph of Asawa taken by Nat Farbman in 1954 for Lifemagazine. Ethel Kessler served as art director and designer for this issuance.

The Ruth Asawa stamps are being issued as Forever stamps, which will always be equal in value to the current First-Class Mail 1‑ounce price. News of the stamps is being shared on social media using the hashtag #RuthAsawaStamps.

She began making her wire sculptures in 1947 while a student at legendary Black Mountain College. Working with whatever wire was available, she made long series of e-shaped loops, similar to knitting loops. The process was painstaking and slow. She soon discovered that in addition to single-layered sculptures, she could also create continuous or intersecting surfaces. Sensual and organic, these multilayered yet still transparent works created a dynamic interplay between interior and exterior surfaces. Inspired by plants, snail shells, spiderwebs, insect wings and water droplets, Asawa’s sculptures, when shown together, can evoke an undersea domain, a magical upside-down world or an environment all their own.

In addition to her wire sculptures, Asawa is also acclaimed for her large public projects, which include several fountains in San Francisco; the Japanese American Internment Memorial in San Jose, CA; and San Francisco State University’s Garden of Remembrance, which commemorates Japanese Americans interned during World War II.

Tirelessly committed to arts education throughout her career, Asawa was instrumental in establishing the first public arts high school on the West Coast, now called the Ruth Asawa San Francisco School of the Arts. She served as a member of the National Endowment for the Arts and the California Arts Council, and she advised on the importance of art as a member of President Jimmy Carter’s Commission on Mental Health.

Since her death in 2013, public and critical appraisal of her work has continued to reach wider audiences, with much lauded exhibitions and publications organized by major museums and galleries across the country.

Customers may purchase stamps and other philatelic products through The Postal Store at usps.com/shopstamps, by calling 800-STAMP24 (800-782-6724), by mail through USA Philatelic, or at Post Office locations nationwide.