U.S. Postal Service Celebrates the Arrival of the Mayflower in Plymouth Harbor With New Forever Stamp on September 17 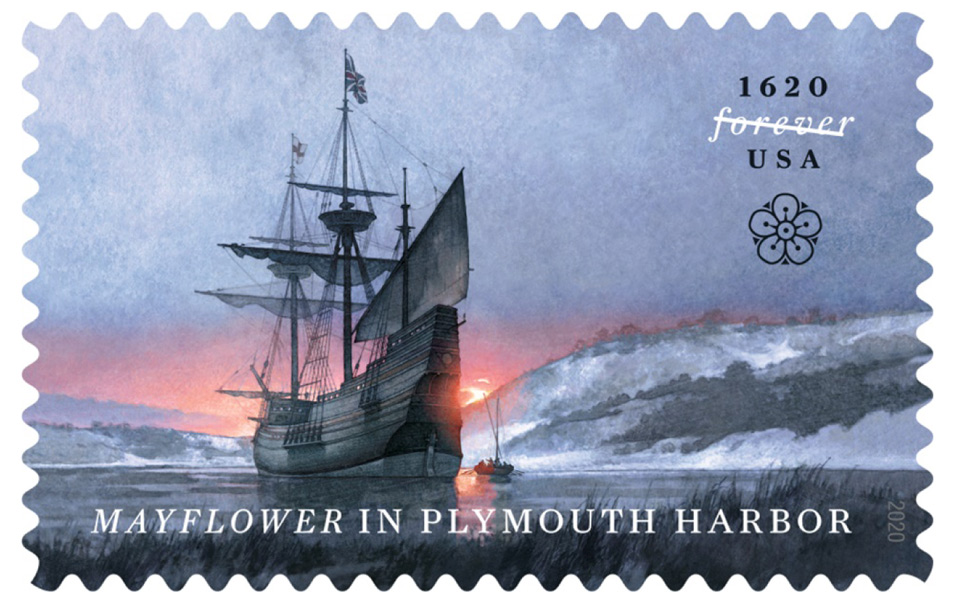 September 13, 2020 - The U.S. Postal Service marks the 400th anniversary of the arrival of 102 English passengers in 1620 on the Mayflower off the coast of Plymouth, MA, with the dedication of the Mayflower in Plymouth Harbor Forever stamp.

News of the stamp is being shared with the hashtag #MayflowerStamp.

On Dec. 16, 1620, a ship that carried 102 English passengers completed a perilous voyage across the Atlantic Ocean from Plymouth, England, and anchored offshore of today’s Plymouth, MA. The Mayflower’s passengers would become known to us as Pilgrims, and the story of their settlement in America would inspire future generations and become part of the larger story of the nation’s founding ideals.

The Mayflower Compact, Plymouth Rock, Thanksgiving — all became part of the enduring legacy of this tiny band of settlers we honor on the 400th anniversary.

Artist Greg Harlin illustrated the stamp, using a combination of watercolor, gouache and acrylics, with some digital refining to convey a scene of desolate beauty at the end of the Pilgrims’ harrowing journey to an unfamiliar world.

The Mayflower in Plymouth Harbor stamp is being issued as a Forever stamp, which will always be equal in value to the current First-Class Mail 1-ounce price.

Customers may purchase stamps and other philatelic products through the Postal Store at usps.com/shop, by calling 800-STAMP24 (800-782-6724), by mail through USA Philatelic, or at Post Office locations nationwide.