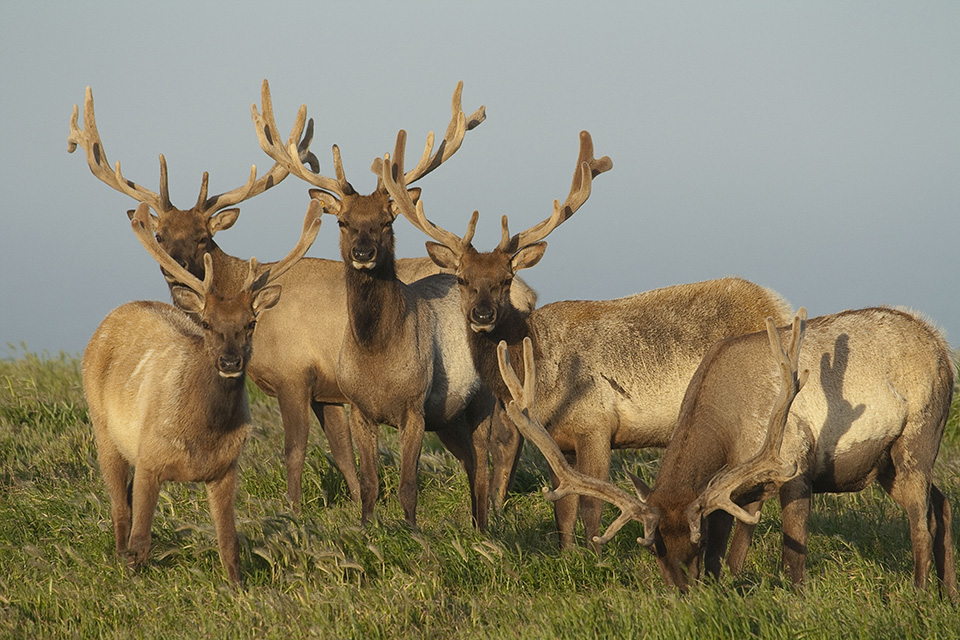 September 19, 2020 - POINT REYES, Calif.— The National Park Service released a management plan amendment on Friday for Point Reyes National Seashore that would enshrine commercial cattle ranching in the California park at the expense of native wildlife and natural habitat. It also calls for the killing of native tule elk and would authorize new agricultural uses that will put other wildlife at risk.

“This is a disaster for wildlife and a stunning mismanagement of one of America’s most beautiful national parks,” said Jeff Miller at the Center for Biological Diversity. “The Park Service is greenlighting the slaughter of native wildlife in Point Reyes. After the elk, the next likely victims will be birds, bobcats, foxes and coyotes. This plan is illegal and immoral, and we're going to do everything we can to stop it.”

In today’s “final environmental impact statement,” the Park Service selected Alternative B, which extends 20-year commercial leases to 15 private dairy and beef cattle ranches on 26,100 acres of Point Reyes National Seashore and Golden Gate National Recreation Area lands in Marin County. The plan authorizes continued overgrazing and does little to address ongoing damage by cattle to water quality and habitat for endangered species and other wildlife.

The plan allows the Park Service to shoot native tule elk to appease ranchers and drive elk away from designated ranch lands. It sets an arbitrary population cap of 120 elk for the Drakes Beach herd, currently estimated at 138 elk, to be maintained by killing the animals. The Park Service can shoot any free-roaming elk that attempt to create new herds in the park, which is the only national park with tule elk.

The plan also allows conversion of park grasslands and wildlife habitat to artichoke farms and other row crops, as well as the expansion of commercial livestock farming to introduce sheep, goats, pigs or chickens. This will inevitably lead to conflicts with other native wildlife in the park and could result in ranchers calling for killing of coyotes, bobcats, foxes and numerous birds.

The Park Service is expected to sign a “record of decision” giving final approval to the plan in 30 days.

The Center for Biological Diversity, Resource Renewal Institute and Western Watersheds Project sued the National Park Service in 2016 for attempting to extend cattle grazing leases in the National Seashore without conducting an environmental review or updating the park’s badly outdated general management plan. In 2017 conservationists, ranchers and the Park Service agreed to a public environmental review process and an amendment to the National Seashore’s management plan.

Under the Point Reyes Act, which created the National Seashore, and the Organic Act, which guides management activities in national parks, activities authorized by the Park Service are supposed to maximize the protection of natural resources.

More than 7,600 members of the public commented on the draft environmental impact statement for the management plan. Evaluation of the comments showed that more than 90% of the public wanted wildlife, recreation and nature to be prioritized at Point Reyes, and that the vast majority opposed continued ranching. Most public comments and many conservation organizations supported Alternative F, which would end ranching and phase out all commercial dairies and ranches.

Yet the final plan authorizes excessive levels of cattle stocking that have led to overgrazing, significant soil erosion, degradation of water quality, damage to endangered species habitat and spread of invasive plants in the park. The final plan includes vague, aspirational management guidelines and standards that are supposed to protect natural resources from damage from cattle grazing and other ranching activities such as mowing and dumping of manure in waterways. But the Park Service has consistently been unable and unwilling to enforce grazing lease conditions.

In keeping with the mission of the National Park Service, the reintroduction of tule elk to the Point Reyes peninsula has so far been a success story for the conservation of native species and restoring ecosystems. The Drakes Beach elk herd is one of two free-roaming herds in the park; the Limantour herd had an estimated 163 elk in 2019.

Letting elk roam free is critical to their survival. The Tomales Point elk herd in northern Point Reyes National Seashore is trapped behind a fence on a peninsula to appease ranchers, confined in an area with scarce water during dry years. More than 250 elk, more than half of the Tomales herd, died during drought from 2012-2014.