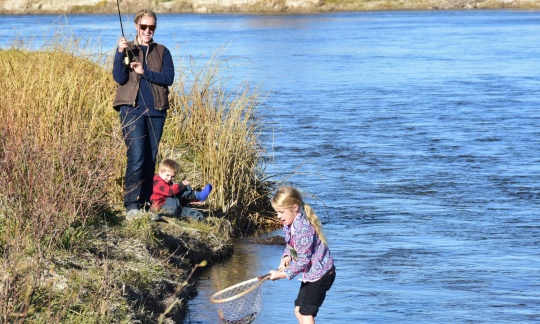 October 29, 2020 - DES MOINES, Iowa — On Wednesday, on behalf of the Trump Administration and in support of America’s military members and families, U.S. Secretary of the Interior David L. Bernhardt announced at the Iowa Gold Star Museum that Gold Star Families and U.S. military veterans will be granted free access to national parks, wildlife refuges and other Federal lands managed by the Department of the Interior starting on Veterans Day (Nov. 11) this year and every day onward.

“The Trump Administration is committed to honoring American patriots – the men and women who have served in our armed forces,” said Secretary Bernhardt. “With the utmost respect and gratitude, we are granting veterans and Gold Star Families free access to the iconic and treasured lands they fought to protect starting this Veteran’s Day and every single day thereafter.”

Entrance fees for the National Park Service and the U.S. Fish and Wildlife Service and standard amenity recreation fees for the Bureau of Land Management and the Bureau of Reclamation sites will be waived for veterans and Gold Star Families. They will have free access to approximately 2,000 public locations spread out across more than 400 million acres of public lands, which host activities to fit any lifestyle, from serene to high octane, including hiking, fishing, paddling, biking, hunting, stargazing and climbing.

“Our veterans and Gold Star Families have made incredible sacrifices to defend our freedoms and our homeland. Ensuring that they are able to enjoy all of the natural wonders of the country that they’ve served is one small way of saying thank you,” said U.S. Senator Chuck Grassley (IA). “I’m glad to join Secretary Bernhardt here in Iowa today at the Gold Star Military Museum for this historic announcement.”

“Our veterans, fallen servicemembers, and their loved ones have made tremendous sacrifices to protect our freedoms, and we are forever grateful for their selfless service to our nation,” said U.S. Senator Joni Ernst (IA), a combat veteran. “I applaud the Trump Administration for giving back to our veterans and Gold Star Families by granting them free access to America’s beautiful national parks and federal lands that our brave men and women in uniform fought to protect.”

“America’s Gold Star Families have made unimaginable sacrifices for the safety of our country, and we should do everything possible to help them heal,” said U.S. Senator Angus King (ME), Ranking Member of Senate Energy and Natural Resources Subcommittee on National Parks. “America’s public lands are among the most beautiful natural wonders in the world, and their importance to Americans has only grown during the ongoing pandemic. The families of those who’ve lost a loved one in defense of our nation should be able to have access to these treasures free of charge. I’m grateful that today’s order will open these lands, and hopeful that my legislation with Congressman Golden will pass through Congress soon so this initiative will be enacted into law. This is not complicated – it’s simply the right thing to do.”

"This initiative will provide American Veterans the opportunity to find peace and healing in the outdoors in addition to discovering the beautiful lands that we sacrificed so much to protect,"  said Executive Director Warrior Expeditions Sean Gobin.

"I would like to express my great appreciation to the Department of the Interior for building on the success of the America the Beautiful - National Parks & Federal Recreational Lands Annual Pass for military families and extending the benefit to Gold Star Families and to those who have served in support of our nation, in part, to secure these treasured lands," said Iraq and Afghanistan Veterans of America CEO Jeremy Butler. "Exposure to outdoor recreation can provide a wide range of mental health benefits, and given our nation's ongoing veteran suicide crisis, this is a welcome step forward using a whole of government approach to improve the lives of veterans."

"Wounded and Disabled veterans, indeed all veterans and their families, find peace and personal renewal in nature. The opportunity to enjoy the American jewels of nature-our National Park System - with free entry into these parks will speak volumes regarding our nation's desire to honor American citizens who sign a "blank check made payable to the United States of America for an amount up to and including their life,” said Team River Runner.

“On behalf of the Iowa Commission of Veterans Affairs, we are very proud to join in on the announcement of free entrance to all National Parks and other Federal lands managed by the Department of the Interior starting on Veterans Day, Nov 11, 2020. This is a huge show of patriotism and honor to our Veteran’s and the Gold Star Families,” said Chair of the  Iowa State Commission of Veterans Affairs  Elizabeth Ledvina.

Many Department managed lands have direct connections to the American military, such as frontier forts, Cold War sites, battlefields, national cemeteries, and memorials. These special places pay tribute to our veterans and serve as reminders of their courage and sacrifice throughout the history of our nation, from Minuteman National Historic Park where colonists stood in defense of their rights, to Yellowstone National Park, which was protected from vandalism and poaching by the 1st U.S. Cavalry before the National Park Service was established, to Mount Rushmore where modern warriors attend reenlistment ceremonies.

For purposes of this program, a veteran is identified as an individual who has served in the United States Armed Forces, including the National Guard and Reserves, and is able to present one of the following forms of identification:

This Congress, Representative Jared Golden (ME-02) and Representative Rob Wittman (VA-01) with companion legislation from Senators Angus King (I-ME), Lamar Alexander (R-TN) and Steve Daines (R-MT), introduced a bipartisan bill to provide Gold Star Families with free access to National Parks and other federally managed public lands. The Department testified on the legislation and in support of access being extended to all veterans and Gold Star Families. Additionally, during the Secretary’s site inspection at Indiana Dunes National Park over the summer, a National Park Service employee suggested to the Secretary that veterans and Gold Star Families should be able to access national parks for free.

The Interagency America the Beautiful National Parks and Federal Recreational Lands Pass Program already includes a free annual pass for active duty members of the U.S. Military and their dependents. Other free or discounted passes are available for persons with permanent disabilities, fourth grade students, volunteers, and senior citizens age 62 years or older.

The Department also offers free entrance days for everyone throughout the year to mark days of celebration and commemoration including the birthday of Martin Luther King, Jr., National Public Lands Day, Veterans Day, and the signing of the Great American Outdoors Act.
Source: DOI