February 2, 2021 - The U.S. Postal Service will honor Professor Emerita Chien-Shiung Wu, one of the most influential nuclear physicists of the 20th century, with a commemorative 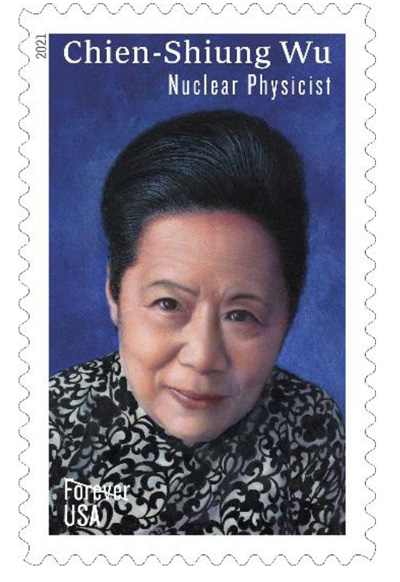 News of the stamp is being shared with hashtags #ChienShiungWu and #ScientificWomen.

Jada Yuan, granddaughter of honoree and reporter for The Washington Post

A pictorial postmark of the First Day of Issue location in New York City is available at usps.com/stamps.

One of the most influential nuclear physicists of the 20th century, professor Chien-Shiung Wu (1912-1997) was a determined advocate for women in science and made enormous contributions to the physical sciences, altering modern physical theory forever.

During a career that spanned more than 40 years in a field dominated by men, Wu established herself as the authority on conducting precise and accurate research to test fundamental theories of physics.

Working on uranium enrichment and radiation detectors for the Manhattan Project during World War II, Wu made invaluable contributions to the experimental process of splitting and harnessing the power of the uranium atom, making possible the production of the world’s first atomic bomb.

The stamp art features a detailed portrait of Wu wearing a black-and-white high-collared traditional Chinese gown known as qipao. The illustration was first drawn in graphite, then rendered in egg tempera paint. The background was painted with the pigment lapis lazuli, a highly valued color historically used in artistic depictions of angels, nobility and the Virgin Mary.

The Chien-Shiung Wu stamp is being issued as a Forever stamp in panes of 20. These Forever stamps will always be equal in value to the current First-Class Mail 1‑ounce price.

Customers may purchase stamps and other philatelic products through the Postal Store at usps.com/shopstamps, by calling 800-STAMP24 (800-782-6724), by mail through USA Philatelic, or at Post Office locations nationwide.