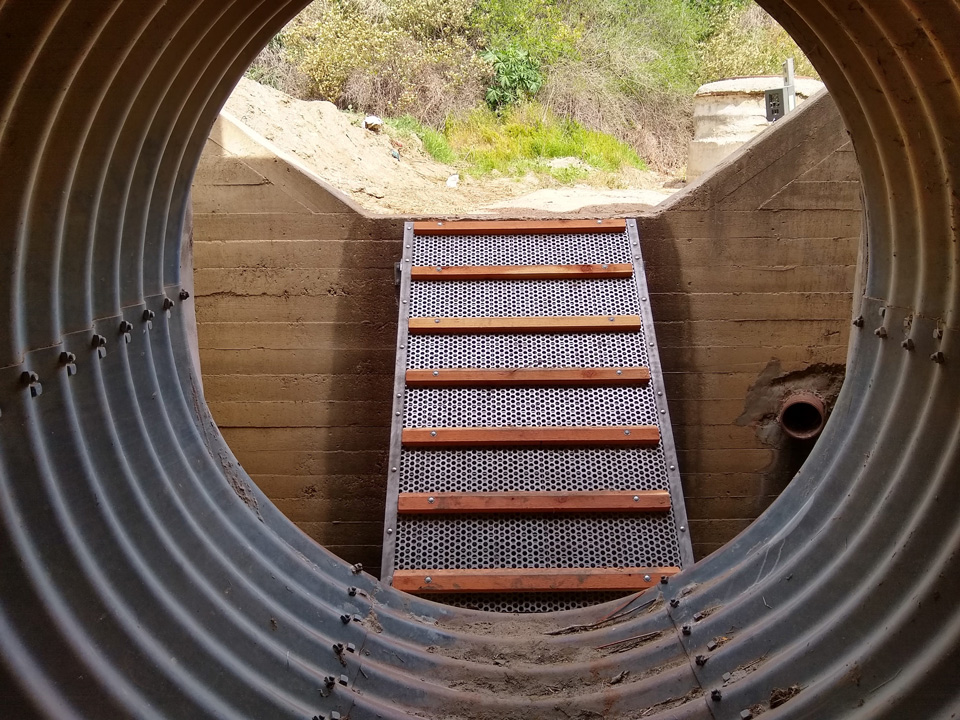 April 16, 2021 - THOUSAND OAKS, Calif.— Wildlife, large and small, are getting some help from their biologist friends at the California Department of Transportation (Caltrans) and the National Park Service (NPS) to cross a dozen-mile stretch of State Route 118, a two-lane highway in Ventura County.

Photos can be accessed here.

At the heart of the mitigation project are two goals: to create more habitat connectivity for diverse species of wildlife and to keep animals from becoming roadkill.

The decade-long collaboration has led to retrofitting five drainage culverts to make them accessible for wildlife and adding fencing to funnel animals to them. Overall, the effort has involved an initial year-long study of wildlife movement, mortality, and crossing use, then the acquisition of funds for the retrofits followed by the construction work of modifying the culverts and adding fencing, and finally post-construction wildlife monitoring.

The retrofits are mostly complete and are now being monitored by wildlife biologists using remote cameras to assess how well their efforts have succeeded. As many as 10,000 images are being captured each month by remote cameras.

“If we want to keep a diverse wildlife community in these areas, we need to help them cross these roadways or eventually we’re going to lose species that are not capable of crossing,” said Justin Brown, a wildlife biologist with Santa Monica Mountains National Recreation Area (SMMNRA), a unit of the NPS.

According to Brown, wildlife crossings are areas where animals naturally approach roadways, such as where riparian areas intersect them. Many of these crossings intersect different types of roads in the region, including highways and freeways. Animals suffer the consequences when motorists hit them as they attempt to cross the road.

In many situations, animals apparently view roads as a barrier to movement and do not even try to cross them. Ultimately, this can lead to dividing a formerly single population into two or more separated, and sometimes even isolated, population segments. As with what is happening with the mountain lion population in the Santa Monica Mountains, this can cause a range of adverse effects, including a lack of genetic diversity. Roads like Highway 118, though they are far smaller and have far less traffic than Route 101, generally present more of a mortality threat for wildlife.

Caron said that even though most roads have culverts, many are not appropriate for all species due to their location, size, or surrounding habitat. Many underpasses are unusable for wildlife species because of siltation blocking the culvert or walls associated with the culverts blocking access.

“Over the years, we’ve discovered a number of techniques that help reduce collisions and maintain connectivity for wildlife like fencing with escape points such as ramps or one-way gates,” Caron said.

Though NPS is still in the middle of the post-construction study, it’s clear that the mitigation is having a large impact on the permeability of the roadway for local wildlife. Some culverts that had almost no use prior to the retrofitting of ramps are now seeing wildlife use almost daily.

In June at another site, Brown was surprised to see images of a black bear lumbering along a box culvert known as LaCumbre, where a steel ramp had recently been installed. The drainage leading to the culvert passes through citrus and avocado orchards as well as near homes in the small community of Somis. The omnivore appeared to have come from and returned to the north in the direction of the Santa Susana Mountains.

“During the year and a half of monitoring along highway 118 across the two monitoring efforts, this is the only time we have seen a bear in the area,” Brown said. “It was kind of a fluke but rewarding to see it use the ramp rather than risk getting hit on the roadway."

At the Long Canyon underpass, an almost 10-foot-tall cement wall on its north end proved to be a hindrance for wildlife attempting to cross beneath the highway. The mitigation here consisted of building a long concrete ramp allowing animals to walk down into the culvert. Fencing was also installed on the north side of the road to funnel animals onto the ramp, while the south side is a natural funnel, so no fencing was used. Based on photos from remote cameras, usage has dramatically increased, including from a wide variety of species.

At another culvert, dubbed Fox Barranca, there was previously a 6-foot drop with a pool of water at the bottom. Caltrans workers installed “riprap,” which filled in the drop with boulders of varying sizes. This created a natural-looking ramp into the culvert, especially after soil fills in the spaces around the rocks and plants begin to grow. Animals have started to regularly use this natural ramp as well.

“The Caltrans Division of Environmental Planning is very excited to be part of a project that has brought a positive impact to wildlife species in an important wildlife corridor,” said Celina Oliveri, a Caltrans biologist who was instrumental in getting the project off the ground. “We will continue to promote improvements to corridors and linkages which facilitate safety for both wildlife and motorists in future Caltrans projects.”

Thus far, Caltrans maintenance crews are reporting picking up less roadkill along the stretch that includes the five crossings.

April is #ConnectedConservation month and this wildlife crossing project that was done in collaboration with our partner, Caltrans, is a perfect example of a growing global movement that recognizes and encourages working together on conservation efforts across boundaries. We are all interconnected, and it is part of our mission to sustain and protect viable populations of native wildlife species who live in our midst. To learn more about #ConnectedConservation, click here.

Santa Monica Mountains National Recreation Area (SMMNRA) is the largest urban national park in the country, encompassing more than 150,000 acres of mountains and coastline in Ventura and Los Angeles counties. A unit of the National Park Service, it comprises a seamless network of local, state, and federal parks interwoven with private lands and communities. As one of only five Mediterranean ecosystems in the world, SMMNRA preserves the rich biological diversity of more than 450 animal species and 26 distinct plant communities. For more information, visit nps.gov/samo.