May 3, 2021 - By Kevin Hecteman - The ongoing COVID-19 pandemic is driving even more truck drivers out of their cabs, prompting worries among haulers and food processors that there won't be enough people available to transport the harvest as summer wears on.

John Larrea, director of governmental affairs at the California League of Food Producers, said during the carrot and onion harvests in the Southern California desert, "the trucking companies are telling us that they're already seeing anywhere between 25 and 30% fewer drivers than they had before." 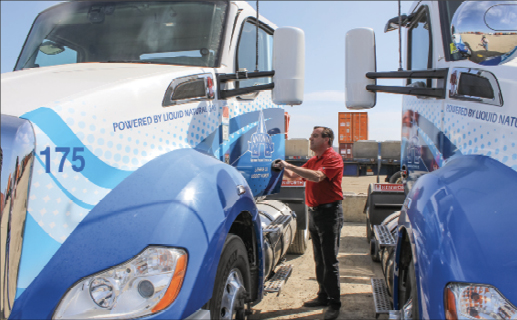 Joe Antonini, president of his family’s trucking company, checks one of his new liquid-natural-gas rigs at the yard in Stockton. Antonini says he has recently begun recruiting for the upcoming agricultural-hauling season, but has had a hard time finding drivers. The shortage, ongoing for a decade, has been made worse by the pandemic. Photo/Kevin Hecteman

That tracks with the experience so far of Joe Antonini, who runs a Stockton-based trucking company that's heavily engaged in seasonal agricultural hauling. Antonini said he's been able to hire 35% fewer drivers than at the same time last year.

"It's becoming more and more difficult," he said, adding that the pandemic and resulting federal actions contribute to the problem.

"Many of the drivers are telling us and other carriers that catching COVID is a concern for them, so they may not want to come back to work for that," Antonini said. "The enhanced and extended relief efforts, economic relief, is holding some of them out, as is the vaccine availability."

With vaccine eligibility expanding, he added, "we're hopeful that some of these folks will come back to work."

Eric Sauer, senior vice president of government affairs for the California Trucking Association, expressed concern that when harvest moves into the Central Valley and Northern California, "we could be seeing a 50, up to 60%, need for drivers for this harvest season."

Antonini noted that carrots harvested in the desert mostly move to Bakersfield for processing, and onions go to Gilroy, Firebaugh and the Turlock area.

"For every load, you really need two trucks, because one's got to be going down as one's coming up," he said.

The bulk of agricultural drivers are hired for a July 1 start, Antonini said.

"We're just now starting to recruit drivers," he said, adding he will probably know by the second week of May where he stands.

"During those four months of July to October, that's when the most drivers are around," he said.

He listed the potential consequences of a summer driver shortage as "crop spoilage, waste, crops not even being able to be harvested."

Driver shortages have been a chronic problem, Antonini said, with a number of factors in play.

"Number one, the Class A driving population across the country is getting older," he said, referring to the drivers license commercial truck drivers need. "We don't see as many young folks getting into the industry as we did 15 years ago. I would say each year for the last 10 years, we've seen it get worse and worse."

Truck-driving jobs are in high demand because of the boom in e-commerce, even before the pandemic, he added.

"What really exacerbates it for the seasonal truckers like us is, we can only offer these folks anywhere from 90 to 120, 150 days of work," Antonini said.

At the trucking association, Sauer said the average age of a truck driver now stands at 52 or 53. He said some companies have been offering bonuses to attract and retain drivers, but described driver shortages as "a decade-long, national issue."

"We've got a very short time period to do anything at all," he said. "The harvest is coming up on us. We're trying to get out ahead of it in order to make sure that it doesn't evolve into some kind of a crisis associated with the inability to be able to pull these vegetables and foods from the fields and get them into the packinghouses or the processing facilities, and ultimately the markets."

One action that could provide partial relief would be the renewal of weight variances for trucks.

At the beginning of the pandemic in March 2020, President Trump issued an emergency declaration that allowed for federal natural disaster assistance for state and local governments. In turn, Caltrans issued temporary permits raising the allowable gross vehicle weight from 80,000 to 88,000 pounds on state highways for trucks hauling essential goods, which included food and paper products and the raw materials needed to produce them.

The emergency declaration expired last July, and a new one would be needed to obtain another weight variance, Sauer said.

Larrea said discussions are ongoing at state and federal levels.

Antonini said trucking companies are "definitely behind this" for agricultural commodities. Some crops can't add 10% weight to the container, he said, but for those that can, it would help.

"If you're short 10% of drivers, and you are able to haul 10% more, in essence you're even," Antonini said. "Any weight variance that could be had for agriculture commodities would be a plus for the industry as a whole."

Although another weight variance represents the most viable option for relief, he said, "in the end, that won't solve the problem."

"If the industry is truly short 35% of drivers come August," Antonini said, "we'll just make a chip in the shortfall."

That prospect raises alarms for Larrea, who said many food companies have inventories below ideal levels as a result of the pandemic's shifting of markets. The companies look at the 2021 harvest to "replenish the inventory," he said, and they anticipate renewed demand from restaurants, schools and other food-service businesses "as the states start to open up."

"That's where we're worried about it, because we don't want to see (crops) left on the ground," Larrea said.

(Kevin Hecteman is an assistant editor of Ag Alert. He can be contacted at khecteman@cfbf.com.)
Reprinted with permission: California Farm Bureau Federation