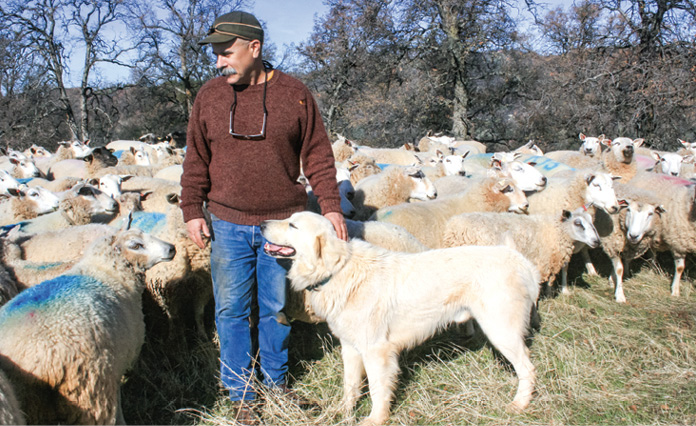 Placer County sheep rancher and University of California Cooperative Extension livestock and natural resources advisor Dan Macon, with his guardian dog Dillon, says Dillon and another dog have learned to split the job of protecting his sheep. One dog stays close to the flock while the other patrols the perimeter, looking for predators.
Photo/Bob Johnson

May 4, 2021 - By Bob Johnson - Many ranchers mix a few impressively large dogs in with their sheep, goats or other livestock, for protection. Although these animals generally weigh in at well more than 100 pounds, their bark is almost always more important than their bite.

"They mostly work as a deterrent," said Carolyn Whitesell, University of California Cooperative Extension human-wildlife interactions advisor. "They will mark the pasture, to let the predators know."

Whitesell made her remarks during the virtual California Rangeland Coalition Summit, as researchers and ranchers discussed how to choose and train livestock guardian dogs, how many to have, and whether the cost of their care pencils out in animals saved.

The job of training these enormous Great Pyrenees, Maremmas, Kangals, Karakachans or Anatolian shepherds is surprisingly easy, Whitesell said, because they basically are bred to know what they are supposed to do.

"Once they are bonded to the livestock, they know it is their job to protect them," she said. "They have been bred for centuries to do this."

The bonding starts early, as the dogs grow up around the animals they will protect as adults.

"The earlier you can get the puppy with livestock, the better," Whitesell advised. "By eight weeks, you want to have the dog with livestock; 16 weeks is too late."

Sheep rancher Dan Macon, who also works as the UC Cooperative Extension livestock advisor in Placer, Nevada, Sutter and Yuba counties, put his Pyrenees-mix guardians Elko and Dillon with his sheep when they were 12 weeks old.

They grew up guarding the sheep and learned to split the job, he said, with one of them staying close to the herd while the other patrolled the perimeter for predators.

Neither of these dogs has had to engage in combat with the large predators that live in the hills outside Auburn, but Macon said he knows the potential danger is there.

"How do we know if we actually have predators?" Macon asked. "We use trail cameras near our pasture, and we have sighted three lions since last March. Where there are sheep, there are predators."

Macon's dogs have collars that let him track where they are and record their movements, which show they are generally most active from dusk until dawn, when the potential danger is greatest.

Elko and Dillon do not herd the sheep and have a distinctly different temperament compared to the border collie who does that job, Mae.

"You want a submissive dog with no prey drive, is calm and alert, and barks," Whitesell advised.

Although guardian dogs basically know their job without training, she said it is important to take the time to accustom them to seeing people on bicycles, riding in trucks and getting along with other dogs in the operation. The dogs must also learn to respect fences.

"They can roam or jump the fence," Whitesell said. "This is typically a bonding issue; they aren't bonded well enough with the livestock. There are also devices to stop the dog from running, jumping or slipping through fences."

The importance of barking makes it worth considering whether livestock guardian dogs make sense if they spend their time close to neighbors.

"Ideally, buy a puppy from working parents, which gives you an idea how the dog will work," Whitesell said. "Make sure the parents have the traits you want—and be ready to be patient."

There is a waiting period before puppies can be effective deterrents to predators, she said, but the wait is probably worth it.

"I've seen mixed results from getting adult dogs," Whitesell said. "Puppies bond with the livestock, but it takes 18 to 24 months for them to be effective. It may take a few years to be sure the dog will not play too rough with livestock."

Males and females can be equally effective guardian dogs, but there can be issues with intact dogs of both sexes.

Whitesell said it is important to avoid the temptation to treat these animals as pets, which could make it more difficult for them to do their job.

"These dogs are adorable, but they need to spend significantly more time with livestock than humans," she said.

Believers in the effectiveness of guardian dogs said they see the day coming when they will be used to protect a wider range of livestock, including cattle.

"In California, these dogs are associated with guarding goats and sheep," Whitesell said, "but I would like to (emphasize) that they can guard anything."

Several UC Cooperative Extension fact sheets on livestock guardian dogs are available online, including one that has estimates of both the upfront and annual operating costs, at ucanr.edu/sites/Rangelands/files/305121.pdf.

That fact sheet estimates the cost of buying a puppy and caring for it as it grows enough to be of use as a protector at around $1,500. Dog food and vet bills come to around $600 a year.

Advisors said those costs can be balanced against the value of the livestock spared attack by predators, and of the peace of mind of knowing the flock is not alone.

(Bob Johnson is a reporter in Sacramento. He may be contacted at bjohn11135@gmail.com.)
Reprinted with permission: California Farm Bureau Federation