May 17, 2021 - By Christine Souza - In water-stressed farming areas of California, farmers removed productive trees and idled other land to divert what little water they have to other crops, as the reality of the 2021 drought became ever more apparent. 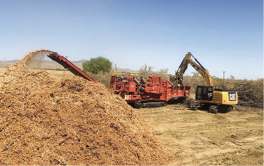 "We're removing 15-year-old, prime-production almond trees," said Daniel Hartwig of Woolf Farming in Fresno County. "We're pulling out almost 400 acres, simply because there's not enough water in the system to irrigate them, and long term, we have no confidence that there would be water in the future."

(Left) Lack of water this year—and the likelihood of future water shortages—forces farmers to remove productive trees, such as this Fresno County almond orchard.
Photo/Courtesy of Daniel Hartwig

Woolf Farming buys water from the Westlands Water District, a contractor of the federal Central Valley Project. Two consecutive dry winters, combined with environmental requirements on the CVP, led the U.S. Bureau of Reclamation to allocate only 5% water supplies to Westlands and other contractors in February—and then to suspend even that amount a few weeks later.

The bureau said last week it was also suspending the 5% allocation it had made for its other agricultural contractors, those north of the Sacramento-San Joaquin Delta.

The State Water Project also reduced its water allocation in March, from 10% to 5%.

Among its provisions, the governor's proclamation directs the State Water Resources Control Board to consider modifying requirements for reservoir releases and diversion limitations and to protect cold water pools for salmon and steelhead. The governor's office said the action "also enables flexibilities in regulatory requirements and procurement processes" to address drought impacts, and directs state officials to expedite voluntary water transfers.

Last month, the state water board informed state and federal water projects that they had allegedly "violated terms and conditions of their water rights" related to delta outflow requirements.

Chris Scheuring, California Farm Bureau senior counsel, said the letter to water project operators warns that "they must meet certain flow objectives specific to water quality and fish, and as a consequence it appears that they're not going to be able to deliver water to their customers, even at the 5% level."

"It's one of those existential years in California, when we've got an extreme drought and farmers are going to be hurting all over the place," Scheuring said. "Some folks may be able to default to groundwater, but it's going to be a very, very tough year for farmers. This really brings home the fact that the state has been too slow in building additional infrastructure that could have captured more water in previous wet years."

Hartwig, who serves as president of the Fresno County Farm Bureau, said the almond trees that were removed last week had plenty of production left, but the farm decided to push them out, even forgoing this year's crop.

"We pulled water off a month ago, when the situation became clear that there wasn't going to be any water in the system," he said, adding that the potential cost of supplemental water, combined with other production costs, contributed to the decision.

"There's very little water available on the market, so even if you could get water, it would be exorbitantly expensive," Hartwig said.

Also looming is SGMA, the Sustainable Groundwater Management Act, which requires local agencies to bring critically overdrafted groundwater basins into balance. Looking ahead, Hartwig said, "We're trying to evaluate what's the ideal crop mix for that and what can we possibly support with groundwater in the years when there is no surface water."

Other farmers are having to make similar calculations.

Jared Plumlee of Booth Ranches, a grower, packer, shipper of citrus with farmland in Fresno, Tulare and Kern counties, said he harvested about 80 acres of citrus a month and a half early, "to save water for other ranches."

Plumlee said the farm acquires water from the CVP Friant Division, and expects to receive a 20% supply.

"During the last drought, we were forced to remove old acreage and redevelop some other acreage, and it was very impactful. We saw supplemental water being very expensive, and we're seeing a similar trend this drought," said Plumlee, who pointed out that supplemental water, if available, is priced at $1,500-$2,000 per acre-foot.

"In the short term, the cost of supplemental water is so high that we're better off just pushing (trees) now and starting our SGMA implementation plans well ahead of schedule," he said. "We've already made our list of the acres that we think that we're going to be forced to lose through SGMA."

Beyond 2021, Plumlee said he is concerned about additional dry years and impacts to farming as growers prepare for SGMA implementation.

"If this dry winter leads to another dry winter, and we get another zero or a 5% year, then I think you'll see another big slug of ground go out," he said. "You couple this drought with SGMA and it's a real catastrophe. It's not something that you can manage your way out of."

Even crops that mature to harvest will likely be affected by lack of water.

At the Almond Board of California, Gabriele Ludwig, director of sustainability and environmental affairs, said almond trees have already set their crop for this year, but dry conditions will affect kernel size—and any damage will carry over to affect next year's crop.

Ludwig said factors in addition to shortage of surface water and preparing for SGMA may be motivating farmers to remove trees: Almond prices have been low for about a year, she said, pointing out that last year's 3 billion pound crop was the largest ever.

"It is the first time in 20 years that prices are low, and that is a difference in terms of being able to pay for water," Ludwig said. "In the last drought, the value of almonds allowed growers, up to a point, to pay for additional water."

Almond demand remains strong, she said, adding that despite trade tariffs, the sector has experienced some of the largest volumes of almonds shipped to export markets of China and India, and that in the U.S—the largest single market for almonds—consumption has nearly tripled.

"Given the regulatory frameworks between unimpaired flows, SGMA and (Endangered Species Act) impacts on the delta, and the fact that we haven't seen fundamental efforts to address the improvements that could be made to ameliorate some of the impacts, it is very frustrating," Ludwig said.

(Christine Souza is an assistant editor of Ag Alert. She may be contacted at csouza@cfbf.com.)

ABOUT CALIFORNIA FARM BUREAU FEDERATION
The California Farm Bureau Federation works to protect family farms and ranches on behalf of nearly 32,000 members statewide and as part of a nationwide network of more than 5.5 million Farm Bureau members.
Source: CFBF