well as the Coroner’s Office, are currently investigating a drowning at the Woodward Reservoir located just outside of Oakdale.  Calls came into dispatch on Wednesday, June 16, 2021, at about 2:33 p.m. reporting a possible adult man going under 100-feet off the shore of Fisher Point.

Our sheriff’s deputies, local area firefighters, as well as EMT paramedics, responded to conduct an exhaustive search.  Multiple boats belonging to the Sheriff’s and Fire Departments were launched as they checked the area.  Ground units also assisted by driving along the lake’s shore.  The Sheriff’s Department utilized their dive team to aid their search.  They utilized sophisticated sonar equipment by scouring the eight to ten-feet deep water.

The swimmer’s remains were located after about two-hours of canvassing the area where he was last seen by relatives.  The transient victim is identified as 39-year-old Carlos Soto.  The coroner’s office will be conducting a death investigation to include a forensic autopsy later in the week.  All other facts and circumstances surrounding the drowning are still being gathered. 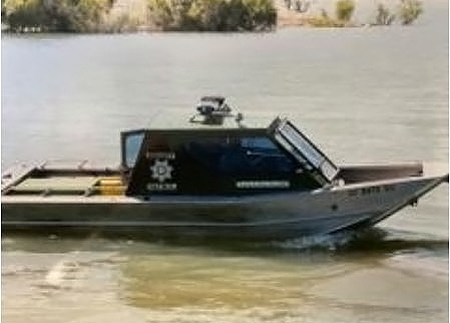 We would like to remind members of the public to always wear their life jackets.  Practice safe aquatic recreational habits, drink responsibly and always swim with others using a buddy system.  The appearance of cold, open water from the outside can be deceiving.  It is important to swim within your own personal capabilities since it only takes a few brief moments for a person to be overcome by the conditions.

Members of the community are urged to contact Coroner’s Detective Nunes at 209-567-4480 if they have added information to share or can assist with the death investigation.