Cousin Jack’s Mariposa Evenings - brought to you by The Mariposa County Arts Council and many fine sponsors – presents it’s next to last weekend of free concerts with a special and unique performance by Adam Burns’ Beat Harveston Friday, August 15, and taking the stage on Saturday, August 16, will be Bootstrap Circus.

Born and raised in the UK, singer/songwriter Adam Burns has had a huge influence on the already burgeoning local Mariposa/Yosemite music scene, since settling in the area some years ago. Not only has he made an impact as a performer and recording artist (lending his production skills to other projects other than his own), but has been a brilliant influence on his students, teaching at his music academy. Burn’s Beat Harvest will be a showcase performance by his most accomplished students; a sort of rock recital. All tips received from the audience will be donated to the Cousin Jack Music Foundation, a non-profit organization that gives yearly scholarships to local graduating students, continuing their studies in music. 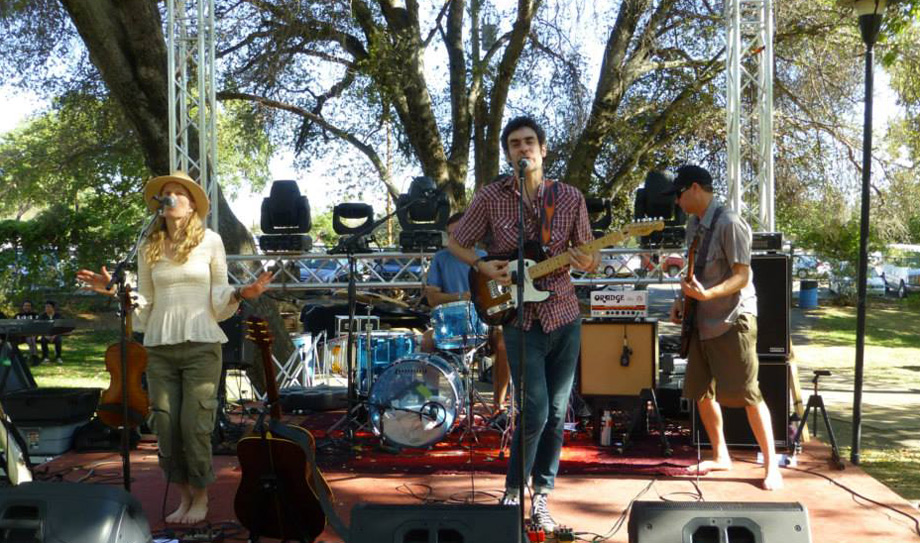 Bootstrap Circus – known for years as The Adam Burns Band

Bootstrap Circus – known for years as The Adam Burns Band – is no stranger to local Sierra music lovers. Famous for their exciting live shows and brilliant recordings, this eclectic band performs their dynamic original songs mixing Pop, Rock, Ska, World Beat and Eastern European influences that have made them a Mariposa Evenings favorite, drawing record breaking crowds each year. Their latest recording, and other CD titles will be available at the show. Visit Bootstrap Circus website to hear a sampling of their music.

All performances begin at 7 p.m. at the Mariposa County Art Park, located on Hwy. 140, between 4th and 5th Streets, in historic downtown Mariposa, CA. Free parking on 5th Street along the Creek Walkway to the Park, also providing handicapped access.

The shows are free to the public – tips for the performers will be solicited, encouraged, and appreciated.

The MARIPOSA COUNTY ARTS COUNCIL, INC. is an incorporated not-for- profit organization, created to promote and support all forms of the cultural arts, for all ages, throughout Mariposa County.

The full schedule can be found at www.mariposaartscouncil.org.

The Arts Council, sponsor of the Mariposa Evenings, is an incorporated not-for-profit organization, created to promote and support all forms of the cultural arts, for all ages, throughout Mariposa County and is supported in part by the County of Mariposa, the National Endowment for the Arts, a federal agency, and the California Arts Council, a state agency.