August 2, 2016 - Reading this book will let you climb the sides of the mountains in Yosemite National Park from the comfort of your chair. Along the way you will learn climbing terms and the equipment that was used to help climb up these walls.

Glen Denny did not let inclement weather stop him and his fellow climbers as he writes how rain and snow had them shivering on climbs and also how the heat of late Spring and early Fall beat down on their bodies with little water to quench their thirst while trying to summit the walls. He introduces many of the characters that made up Camp 4 in the early days of climbing.  One of those climbers is Mariposa resident Gary Colliver who also ended up with a career working in the Park. We highly recommend this book and after reading it your next trip to Yosemite will let you gaze up at the walls surrounding Yosemite Valley with a new found appreciation.

The following is the release announcement for Valley Walls: A Memoir of Climbing & Living in Yosemite by Glen Denny 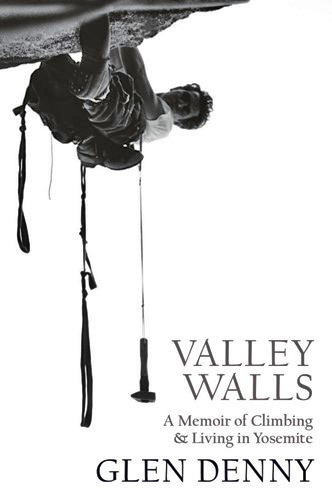 the side of mountains in their quest to pioneer the sport of rock climbing.

The contrast between today’s climbers and the climbers in the 1950s and 1960s is remarkable — not only for the gear but also because these climbers were going where nobody had gone before.

Glen Denny was one of those early climbers, and his memoir, Valley Walls: A Memoir of Climbing and Living in Yosemite, recounts the early days in Yosemite’s Camp 4, now on the National Register of Historic Places.

Patagonia clothing company co-founder Yvon Chouinard said in his praise of the book, “Not many of us old guys are left who can remember the history of Yosemite climbing in the sixties. Thankfully, Glen Denny has put together these stories of the great days that were so important.”

Whether readers are armchair adventurers or “dirt-bag” climbers of today, Denny’s stories of the golden age of Yosemite climbing will entertain and amaze.

Professional rock climber Beth Rodden added, “Glen Denny was part of an age that is iconic to every generation of climbers and epitomizes Yosemite’s spirit and soul. His photographs and stories are as famous as the time, and now his book gives us an even deeper glimpse into such an incredible era.”

Glen Denny was born in Modesto, California, in 1939 and grew up in the nearby town of Livingston, where his father taught mathematics and music at the high school. His first outdoor experiences came through fly-fishing
trips into the Sierra with his father. When Denny moved to Yosemite in 1958 to learn to climb, the first ascent of El Capitan was under way. Inspired by this historic event, he was soon climbing the most challenging routes in
Yosemite Valley, including some of the early ascents of El Capitan, with many of the big-wall pioneers of the late fifties and early sixties. Among his partners were legendary climbers Warren Harding, Royal Robbins, and Layton Kor.

His first ascents include the west face of the Leaning Tower, the Prow on Washington Column, and the Dihedral Wall of El Capitan. Originally self-taught, Denny began photographing Yosemite climbs and climbers in the early sixties before studying photography and filmmaking at San Francisco State University, where he earned a Masters of Fine Arts degree. His climbing films have won awards at several film festivals and his photography has appeared in a number of publications, culminating in his prize-winning 2007 book, Yosemite in the Sixties. Denny lives in San Francisco.