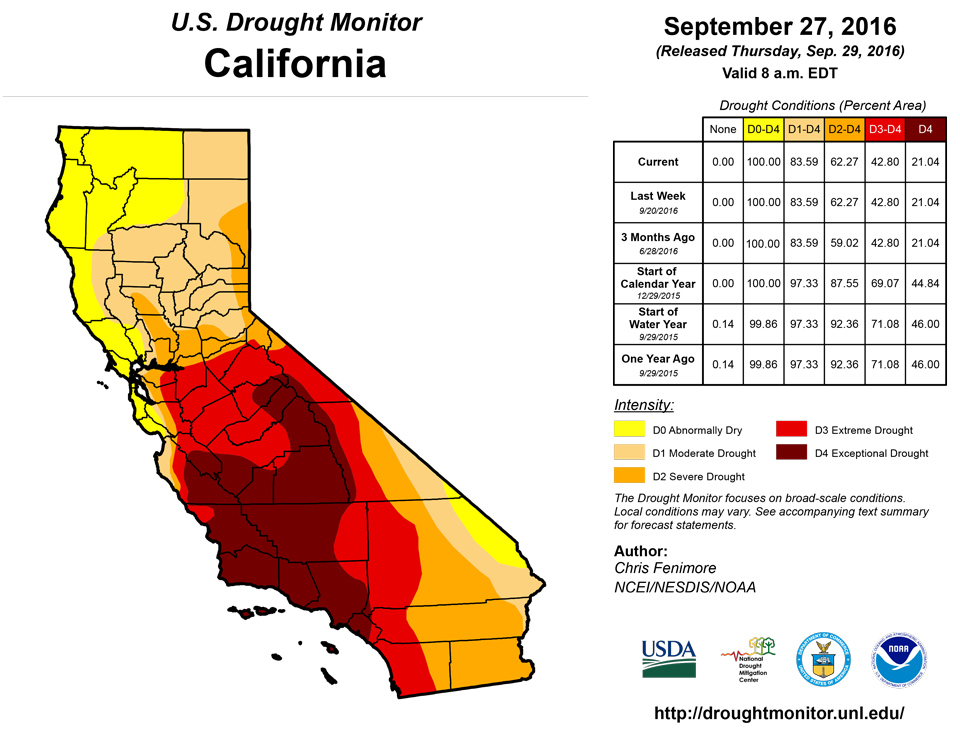 September 29, 2016 - For the USDM 7-day period ending on September 27, a low pressure system produced above-normal precipitation in the western High Plains southwestward into the much of the Mountain West. The frontal boundary that was associated with the low produced copious amounts of rainfall for the Southern Plains stretching northward into Upper Midwest. Parts of the Mid-Atlantic also saw above-normal precipitation for the period. Drier-than-normal conditions existed for much of the country east of the Mississippi, especially for the Ohio Valley. Temperatures were as much as 10 degrees above normal for the parts of the Midwest while the Southwest and Northwest were cooler than normal. These warm and dry conditions in the nation’s eastern half contributed to expansion of drought in the Northeast and Southeast, while drought conditions improved in the High Plains and parts of the South. Please note that the Drought Monitor depicts conditions valid through Tuesday morning, 8 a.m., EDT (12 UTC); any of the recent locally heavy rain which fell after Tuesday morning (September 27) will be incorporated into next week’s drought assessment.

In the middle of the USDM period, an inch of rainfall fell in the drought stricken areas of the High Plains. As a result, short term dryness was removed in northwest North Dakota and multiple levels of drought were contracted in western South Dakota. It was reported that some small grasses have greened up and winter wheat planting is going full steam ahead. However, an extended dry period in the northeastern part of South Dakota kicked off the soybean harvest, and harvest activities should increase this coming week. Precipitation during the last 30-days in Montana and Wyoming was much above normal, which contributed to improved conditions in southern Montana, western Wyoming and eastern Idaho. Streamflow levels at 7 and 14 days were at or above average, while the 30-day percent of normal precipitation was more than 200 percent of normal.

An active cool front that stretched from Texas northward into the Midwest produced moderate to heavy precipitation that, based on radar estimates in Texas, was at least 5 inches above normal for the 7-day period. This caused improvements to the short term drought conditions across much of the state. However in northeast Texas, near-record heat and dryness for the month of September degraded conditions, resulting in the expansion of D0 in the area. It was reported that wildfire was also a concern in the area, especially if the winds were to increase. In western North Carolina, drought impacts are beginning to show in crops and pastures. D1 was expanded to cover more of the western third of the state due to the lack of rainfall at the 30 and 60-day time scales. Much of the area has only seen 10-50 percent of normal precipitation during the month of September and, based on preliminary monthly data, average temperatures were much above average across the state. Drought continues to worsen in the Southeast. Percent of normal precipitation is at 50 percent or less during the last 30 and 60 days. This resulted in the introduction of D4 in northwest Georgia and an expansion of Dx elsewhere in Georgia, Alabama and the Arkansas-Louisiana-Mississippi region. Streamflows in western Mississippi are running at less than the 10th percentile, indicative of a D2-D3 drought. A recent wave of extreme heat increased evapotranspiration and compounded the situation in the area D0 was expanded in western Mississippi based on the SPI. If there is no rain during the next week, further deterioration may be needed in this area during the next USDM shift.

In Colorado, below normal precipitation during the past 30 days was reflected in the low streamflows, resulting in a small expansion of D0 in the central part of the state. Stations in and around Denver were showing near-extreme to extreme dryness at the 3-4 month time scale, resulting in the expansion of D0 and D1 in the area. Due to the unseasonably high precipitation totals in eastern Utah, SPIs have shifted from negative to positive through the six month timescales. It was reported that the benefits of this could be seen in both the soils and streams.

In the Northeast, percent of normal precipitation has been 50 percent or less during the last 30 days and 2-4 inches below normal at 60 days. Drought continues to expand, with extreme drought (D3) conditions expanding further north into eastern Maine. Percent of normal precipitation is at 25 percent or less in the area for the last 30 days and 50 percent during the last 60. Average streamflows at 28 days are below the 5th percentile. Average temperature anomalies during the past 30 days are 3-6 degrees above normal. Preliminary temperature data indicates that much of the Northeast coastline will be record warm for the month of September. Further south in Massachusetts where the worse drought conditions have persisted the longest, negative impacts continue. Farmers are reporting small crop harvests with the season ending sooner than usual. It was also reported that some area farmers are trucking water because their source went dry. Droughts in southern New England can be relieved via a tropical system. Perhaps some relief will arrive in the next week or so. In New York and Pennsylvania, the areas with no drought or dryness were replaced with D0 based on recent dryness. The dryness shows up well in the streamflow, percent of normal precipitation and soil moisture indicators. In the Mid-Atlantic, D0 was expanded in northern West Virginia, the Delmar Peninsula, and the DC area. This is in response to the percent of normal precipitation (10-50 percent) during the past 30 days and the 28-day streamflows at the 20th percentile and below. According to the HPRCC, 30-day SPI values in the area are -2 or lower, indicative of exceptional drought. In southeast Virginia, D0 was trimmed back due to the remnant rains of Hermine and Julia. It is forecast that moderate to heavy rains will fall in the region where drought (D0) was recently introduced. Please note the Drought Monitor depicts conditions valid through Tuesday morning, 8 a.m., EDT (12 UTC); any of the locally heavy rain that fell after Tuesday morning (September 27) will be incorporated into next week’s drought assessment.

It is the dry season in much of the western U.S. , so no changes were made during this USDM shift.

In Hawaii, much of the heavy rains that fell 2 weeks ago did not occur on the drought area. None-the-less, field reports have yet to be delivered to indicate the benefit of what precipitation did fall in the area. Once the reports are in, the islands will be re-examined and changes, if any, will be made. No changes were made in Puerto Rico or Alaska.

During the next few days, a strong upper level low pressure system stalls out over the Ohio Valley providing much needed drought to the Mid-Atlantic region. As much as 3-6 inches of rain is forecasted, so flooding and flash flooding is possible in some areas. Some of the areas that were placed in D0 status this USDM week may see several inches of rain from this event. Please note that the Drought Monitor depicts conditions valid through Tuesday morning, 8 a.m., EDT (12 UTC); any of the recent locally heavy rain which fell after Tuesday morning (September 27) will be incorporated into next week’s drought assessment. Meanwhile, the rest of the CONUS will be relatively quiet. For average temperatures during the next few days, the largest positive anomalies are forecasted to occur in the West, Northwest, and High Plains. The largest negative anomalies should be concentrated in the Midwest and are forecasted to gradually slide southward. For the second half of the next USDM period, much cooler than normal temperatures return to the West Coast, while the warmer than normal temperatures are confined to much of the area east of the Rockies. The 6-10 day outlooks from CPC show an increase probability of warmer than normal temperatures for the eastern half of the country and the western half has the best chance of cooler than normal temperatures. There is an increased probability that above normal precipitation will fall in the Northern Rockies and High Plains while the probability is best for below normal precipitation to occur in the Southeast.