California and National Drought Summary for February 14, 2017 – All Of Mariposa County Drops to Lowest Intensity Level 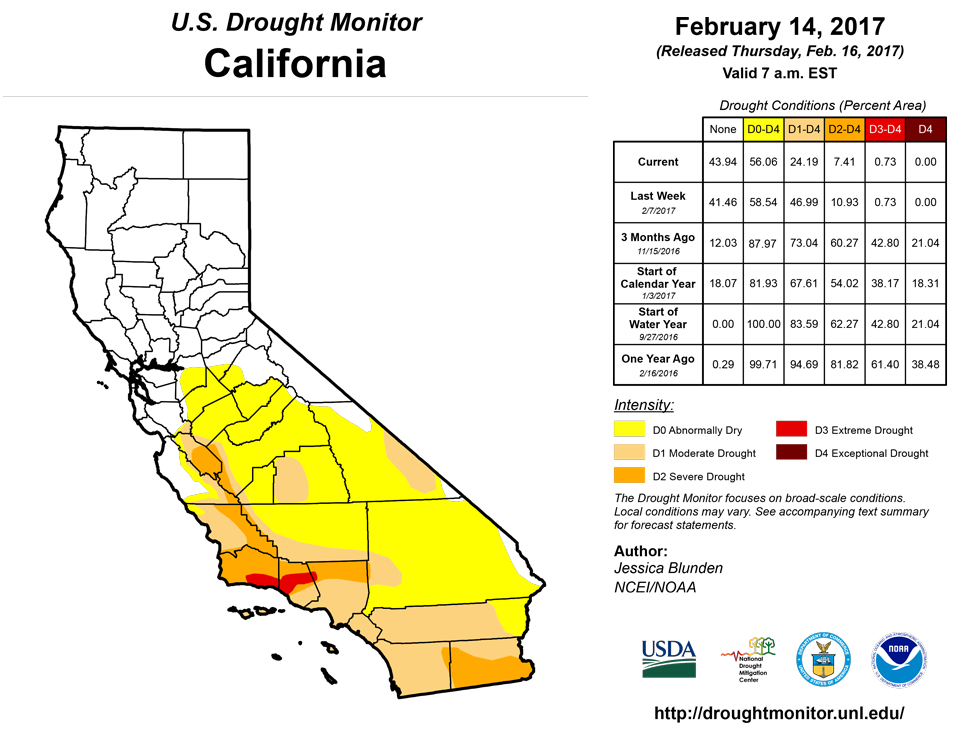 During this U.S. Drought Monitor week, storms continued to impact the west, including parts of California, bringing more heavy precipitation to much of the region, as snow packs continued to increase and reservoirs continued to fill. Fortunately a respite from the storms came toward the latter half of the week. On the other side of the country, a strong low pressure system impacted much of the eastern United States, bringing heavy snowfall to central and northern New England on the 9th. Another nor’easter impacted the area on the 12th-13th. Meanwhile, an upper-level low over northern Mexico, along with a surface frontal boundary, resulted in rain and mountain snow from Arizona to western Texas. Precipitation spread across Texas to Oklahoma on the 12th-13th. Not all regions received rainfall. Much of the southeast continued to receive below-normal precipitation while record high temperatures spread across the south during the 11th-12th.

With two major storm systems dumping heavy snowfall over large areas, most of the region saw normal to above-normal precipitation over the past week and drought improvements were made in several areas. Notably, the drought footprint across Maine decreased substantially with just a small area in the southwest remaining in moderate drought (D1). Conditions in eastern, far western, and part of the Southern Tier of New York, northwestern Vermont, and northern New Hampshire also improved. Recent precipitation has been 200-400% of average.

On this week’s map, deficient rainfall and abnormally high temperatures led to an extension of Abnormally Dry (D0) conditions across part of southern Virginia from Charlottesville to Roanoke, where there has been only one minor rain even (Feb 8th – 9th) since January 24th. On the 12th, Lynchburg observed its fourth 80+ degree maximum temperature day in February since records began there in 1893 and its first 80-degree day since the 1930s. Abnormally dry conditions also worsened in parts of northern Virginia as an area of Moderate Drought (D1) was extended from southern Maryland southwestward to Charlottesville.

On this week’s map, dryness continued to prevail across much of the region along with record high temperatures in some areas on the 12th. The warmth led to signs of early spring, with Bradford pears already in full bloom in North Carolina from the southern mountains to the piedmont. Abnormally dry (D0) conditions were expanded eastward across most of eastern North Carolina, except for the coastal areas. These conditions were extended northward into southeastern Virginia and southward into the northern coastal region of South Carolina. In northern Georgia, conditions worsened and the swath of severe extreme drought (D3) was expanded. Extreme drought conditions in Rabun County were extended east and severe drought (D2) replaced moderate drought (D1) to the east of that area. However, in central Georgia, conditions actually improved a bit, with moderate drought (D1 and abnormally dry conditions contracting several miles northward. In Alabama, extreme drought (D3) conditions across southern Tuscaloosa County to southern Saint Clair County improved to severe (D2), while moderate drought (D1) overtook abnormally dry (D0) conditions in the northwestern corner. Lawrence County also saw degradation of conditions, leading to severe drought (D2) there. In central and south Florida, the dry season has been very dry and moderate drought (D1) was introduced across a broad swath. Rainfall totals since the beginning of October rank among the top ten driest over much of the area. Streamflow and groundwater are beginning to decrease, and the potential for wildfire is rising to concerning levels, according to local officials.

Dry and very warm conditions prevailed this past week across most of the region, leading to additional drying across the area. However, a storm system on the 12th-13th dropped heavy rainfall in parts of Oklahoma, notably across the south. Some of the rain bands were heavy enough to improve drought conditions in a couple of small swaths in the southeastern portion of the state near the Texas border. In Texas, most of the heavy precipitation, while welcome, fell on areas that were not experiencing and drought or abnormal dryness. There was some small expansion of drought in north-central Texas and short-term drought in the far south. Temperatures have been around 4degrees F warmer than normal for several months.

On this week’s map, a long swath across central and eastern Missouri was degraded from abnormally dry (D0) conditions to moderate drought (D1). Streamflows in the area have plummeted over the past two weeks to less than 25 percent of normal.

Snowpack around 60 percent of normal as of early February led to the introduction of abnormally dry conditions (D0) in part of central Montana from northern Meager to south and central Fergus counties. In eastern Colorado, moderate drought conditions (D1) were extended to northwest Yuma County, northern Washington County, and southeast Logan County. This area has received below 50 percent of normal precipitation since the beginning of October, and recent weather has been hot and windy. The winter wheat also appears to be in poor condition. Additionally, abnormally dry (D0) conditions were expanded to the northern border of Colorado in Weld County.

Storms continued to drop heavy precipitation over parts of California, leading to widespread improvements of the multi-year drought in the state, although some pockets have missed out on the precipitation and water restrictions remain due to low reservoir levels. A few large–scale improvements were made in central and southern California. Drought conditions improved in Monterey and eastern Santa Clara Counties. Western Monterey and most of Santa Clara County are now drought free. Improvements were also made across the San Joaquin Valley, with snowpack well above 100% in the Sierras. Reservoirs are being replenished across most regions. At the foot of the Sequoia National Forest, Lake Isabella’s water level increased 20 percent. Further south, drought conditions broadly improved across San Bernardino and southern Inyo counties. However, Death Valley remains in moderate drought (D1) as the area has received just 35% of its normal precipitation for the water year to-date.

On this week’s map, no changes were made in Alaska or Puerto Rico. In the Hawaiian Islands, two cold fronts produced significant rainfall over many of the dry leeward areas. Normal conditions returned to Niihau, Oahu, Molokai, Lanai, Kahoolawe and 1-category improvements were made across Kauai and Maui. However, the fronts weakened considerably by the time they reached the Big Island which resulted in only spotty relief. The rainfall benefited pastures and other vegetation that dried out in January. As such, the Kawaihae area of the Big Island improved from moderate drought (D1) to abnormally dry (D0) conditions. The lower southwestern slopes of the Kohala Mountains returned to normal.

The NWS WPC 7-Day Quantitative Precipitation Forecast (QPF) calls for much more heavy precipitation to impact the west, from Washington all the way to southern California, with an area in northwestern Washington forecast to receive as much as 10.8 inches of precipitation. Overall wide swaths are expected to receive well over two inches of rainfall. Rainfall may also impact southern Texas. Moving eastward, much of the southeast is forecast to see a quarter to a little over an inch of rain over the seven-day period. Once again, central and northern New England may see heavy moisture during the week, with the heaviest amounts projected over northern New Hampshire. The CPC 6–10 day outlooks call for a high probability of above-normal temperatures across the eastern two-thirds of the United States, and below-normal temperatures forecast to prevail in the west. Below-normal precipitation is forecast for a swath in the southwest covering Arizona, New Mexico, and central to western Texas while above-normal precipitation is expected most everywhere else in the contiguous U.S. Northern Alaska is also expected to receive above average precipitation and below-average temperatures during the period, while the southern tier is forecast to be warmer than average.