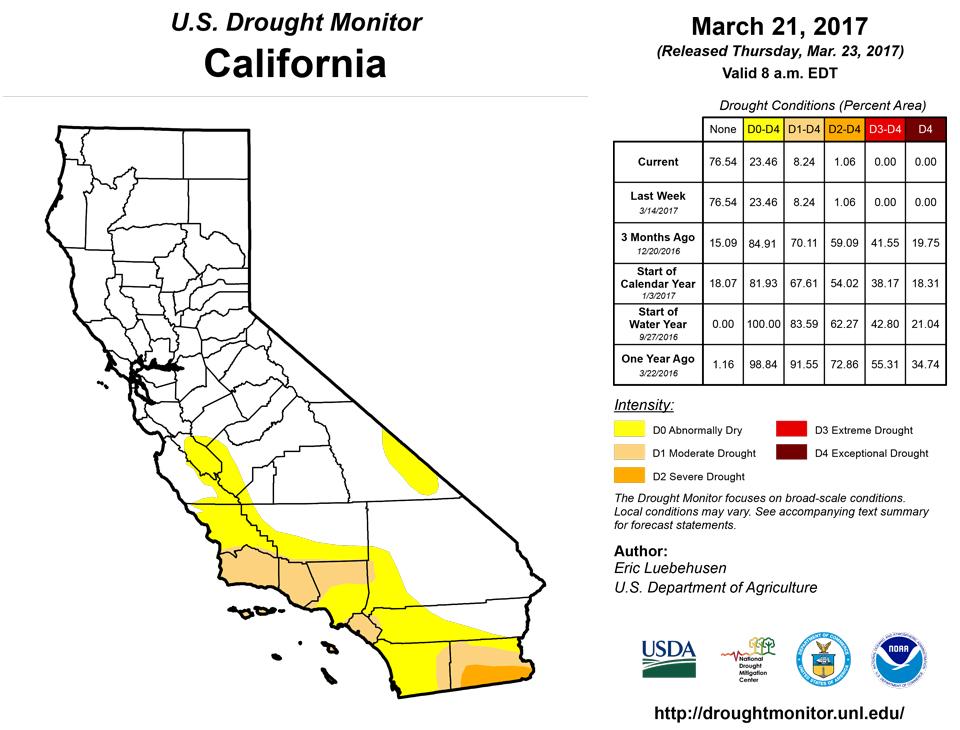 March 23, 2017 - A late-winter cold snap over the eastern half of the nation contrasted with warmer-than-normal conditions from the Plains to the Pacific Coast, save for lingering chilly weather in the Northwest. The eastern cold spell was accompanied by mixed precipitation across the Mid-Atlantic and Northeast, resulting in widespread drought reductions. Much of the south experienced drier-than-normal weather, which coupled with recent dryness led to widespread expansion of drought. Drought conditions across the west remained unchanged, though renewed Pacific storminess was taking aim at the region at the end of the period.

A late-winter storm brought widespread rain and snow to the region at the beginning of the period, further alleviating drought intensity and coverage. Precipitation tallied 1 to 3 inches (liquid equivalent) from northeastern Pennsylvania into southern and central Maine, resulting in widespread 1-category reductions of drought intensity and coverage. However, although conditions have been favorably wet over the past 90 days, lingering Moderate and Severe Drought areas (D1 and D2) have reported below-normal precipitation over the same time frame. Furthermore, these same locales are still exhibiting pronounced long-term deficits, with 12-month precipitation averaging 60 to 80 percent of normal. While streamflows have rebounded, slower-to-recover groundwater levels remained much lower than average. Despite the recent rain and snow — which alleviated the short-term (“S”) component of the drought — long-term drought (“L” on the map) remained in areas where significant long-term deficits persisted.

A late-winter storm brought moderate to heavy rain, sleet, and snow to the region at the beginning of the period, easing drought intensity and coverage. Precipitation was heaviest (2 to 4 inches) from southeastern Virginia onto the Delmarva Peninsula, where Abnormal Dryness (D0) was removed. The precipitation was somewhat lighter (1 to 3 inches) along and west of I-95, but some of the heaviest rain was well placed in northern Virginia, allowing for reduction of Moderate and Severe Drought (D1 and D2). In contrast, parts of western Virginia reported less than an inch, with 30-day precipitation deficits now topping 2 inches; in these areas, Moderate Drought was expanded to reflect the D1-equivalent Standardized Precipitation Index out to 3 months.

Locally heavy rain facilitated drought reduction across the interior, while persistent dryness led to drought expansion and intensification over southern portions of the region. Rain totaled 1 to 3 inches (locally more) from western and northern Tennessee into western North Carolina as well as northern Alabama; modest reductions in Abnormal Dryness (D0) as well as Moderate to Severe Drought (D1 and D2) were made where the heaviest rain fell. Additionally, assessment from the field led to a reduction of the Extreme Drought (D3) in north-central Alabama. Conversely, rain bypassed most areas along the Gulf and southern Atlantic Coasts, with 30-day deficits of 2 to 4 inches encompassing a large area from central and northern Florida and South Carolina westward into southern Alabama. D1 was added to southeastern South Carolina and northern Florida where 90-day rainfall stood at a meager 25 to 50 percent of normal. Likewise, D2 was expanded over south-central Florida, coincident with 90-day rainfall less than one-third of normal. While a wet signal lingers out to 90 days across the southern half of Georgia and Alabama, pronounced dryness over the last 60 days (40-70 percent of normal) coupled with declining streamflows led to widespread expansion of D0.

Drought expanded and intensified during the period, particularly over southern and western portions of the region. The last 60 days have featured much-below-normal rainfall (30 to 50 percent of normal) across most of Louisiana as well as southwestern Arkansas and southern Mississippi, with Abnormal Dryness (D0) and Moderate Drought (D1) expanded to capture areas where soil moisture and streamflow declines are most pronounced. More alarmingly, 6-month rainfall has totaled a meager 40 to 60 percent of normal in the region’s core D1 and D2 (Moderate and Severe Drought) areas. Conditions in Missouri remained largely unchanged, as the state awaits much-anticipated weekend rainfall to ease the rapid decline in soil moisture for summer crop planting.

There were no changes made to Midwestern drought depiction during the period. Increasingly dry conditions were noted in southern and western portions of the region. These locales will need rain over the upcoming weeks to prevent a rapid increase in drought coverage and intensity. The current spell of chilly weather (5-10°F below normal) has largely mitigated the impacts of the recent dryness, with 60-day precipitation averaging 20 to 50 percent of normal across west-central Minnesota (and environs) as well as from southeastern Iowa into southern Illinois and northern Kentucky.

There were no changes to this area’s drought depiction, with light showers (less than 0.5 inch) offering no substantial relief to the Long-term Moderate Drought (D1).

The short-term trend toward increasing dryness and drought continued, though some benefits from recent rain were noted in the south. In Deep South Texas and along the Gulf Coast, 2-week rainfall of 2 to 6 inches resulted in widespread reductions of Abnormal Dryness (D0). In contrast, unseasonable warmth (10-15°F above normal) and dryness (60-day rainfall 30 to 50 percent of normal) led to widespread expansion of D0 from Amarillo to Lubbock. Similarly, 60-day rainfall less than 30 percent of normal led to the introduction of Moderate Drought (D1) in north-central portions of the state. The northeastern corner of Texas has also seen some of the driest conditions over the past 60 days, with precipitation totaling less than 50 percent of normal (locally less than 20 percent); consequently, D1 was expanded to reflect the pronounced short-term dryness.

Outside of New Mexico, conditions remained unchanged to region’s predominantly long-term drought. A pronounced dry signal over the past 60 days (10-35 percent of normal) led to an increase in Abnormal Dryness (D0) and Moderate Drought (D1) across eastern New Mexico. Meanwhile, the Southwest’s lingering long-term drought areas are still exhibiting deficits beyond the 2-year window, with 3-year precipitation totals averaging 60 to 75 percent of normal. More rain will be needed to fully eradicate the lingering impacts and deficits of the region’s 5-year drought, particularly in southern California.

In Alaska, there were no changes made to the state’s Abnormal Dryness (D0) as bitter cold weather (up to 20°F below normal) prevailed. In Hawaii, Abnormal Dryness (D0) and Moderate Drought (D1) expanded across the Big Island to account for a lack of rain over the past 90 days (15-30 percent of normal in the south, 30-50 percent of normal on the northern half of the island) as well as low streamflows and high levels of vegetation stress (as detected in satellite imagery). Similarly, D0 was added to Molokai to reflect low streamflows and lackluster 90-days rainfall totals. Conversely, D0 was reduced over northern Puerto Rico where rain topped 2 inches, pushing the 90-day rainfall to above-normal levels over all but southern-most portions of the island.

A dry start to the period featuring lingering late-winter chill over the east will give way to increasing chances for rain and mountain snow from the Pacific Coast States into the nation’s mid-section. A cold area of high pressure will slide off the East Coast, allowing a pair of slow-moving disturbances to track from the Pacific Coast into the middle Mississippi Valley. These systems will ultimately slow in response to building high pressure over the upper Midwest, resulting in potentially heavy rain (1 to 4 inches) from the central Gulf Coast into the middle Mississippi Valley, with a secondary swath of moderate to heavy rain (locally more than an inch) from the central High Plains into the Great Lakes and Northeast. Likewise, locally heavy rain and mountain snow will return to the west, though the precipitation will largely bypass the lingering long-term drought areas in the Southwest. The NWS 6- to 10-day outlook for March 28 – April 1 calls for near- to above-normal temperatures and precipitation over most of the nation, with cooler-than-normal conditions confined to northern New England and drier-than-normal weather limited to California and southern Florida.