March 25, 2017 - Designed to educate, amuse, or advertise, pictorial maps were a clever and colorful component of print culture in the mid-20th century, often overlooked in studies of cartography. A new book published by the Library of Congress in 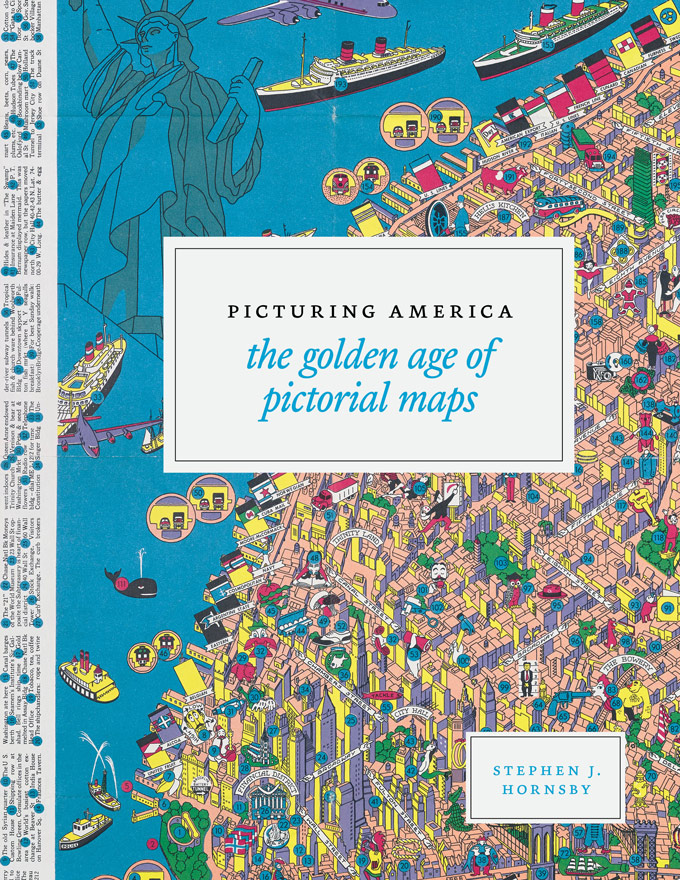 association with the University of Chicago Press, “Picturing America: The Golden Age of Pictorial Maps,” by Stephen J. Hornsby, celebrates these vibrant maps, tracing their development and proliferation from the 1920s to the 1970s.

Cartographers have long incorporated illustrations into their maps, drawing mountains, cities, and even sea monsters on maps, looking back at some medieval examples. Hornsby demonstrates how 20th-century artists adapted this tradition, encouraged by improvements in print technology and inspired by trends in advertising, graphic design and popular culture.

More than 150 maps, most drawn from the Library of Congress’s Geography and Maps Division, are illustrated in six thematic chapters. “Maps to Amuse” includes satirical works like “A New Yorker’s Idea of the United States of America” (1935), while “Maps to Instruct” shows such maps as “A Pictorial Chart of American Literature” (1932), marking the residences of famous American authors. Regional tourism ads, World War II posters, and maps of colonial America are just a few of the many types of maps encountered in this volume.

The New York Times calls the book “beautifully illustrated” and notes that it documents the golden age of pictorial maps, from the 1920s to the 1970s. It includes the playful (distorted views of the country from the perspective of New Yorkers, Texans and Californians); the obscure (a map of volunteer fire departments in Philadelphia, circa 1792, commissioned and drawn in 1938); and more of the obscure (a map of Michigan bakeries).

“Picturing America” shows how mid-century mapmakers paired vivid illustrations with educational information, entrepreneurial spirit, and humor to create lively pictorial maps that are as entertaining to today’s readers as they were to their original audiences.

Stephen J. Hornsby is director of the Canadian-American Center and professor of geography and Canadian Studies at the University of Maine. He is the author and co-editor of several books, including the prize-winning “Historical Atlas of Maine.”

“Picturing America” is a 304-page hardcover book including more than 150 color illustrations. It is available for $45 in the Library of Congress Shop, 10 First St. S.E., Washington, D.C., 20540-4985. Credit-card orders are taken at (888) 682-3557 or loc.gov/shop/.
The Library of Congress is the world’s largest library, offering access to the creative record of the United States—and extensive materials from around the world—both on site and online. It is the main research arm of the U.S. Congress and the home of the U.S. Copyright Office. Explore collections, reference services and other programs and plan a visit at loc.gov, access the official site for U.S. federal legislative information at congress.gov, and register creative works of authorship at copyright.gov.
Source: Library of Congress