California and National Drought Summary for May 2, 2017 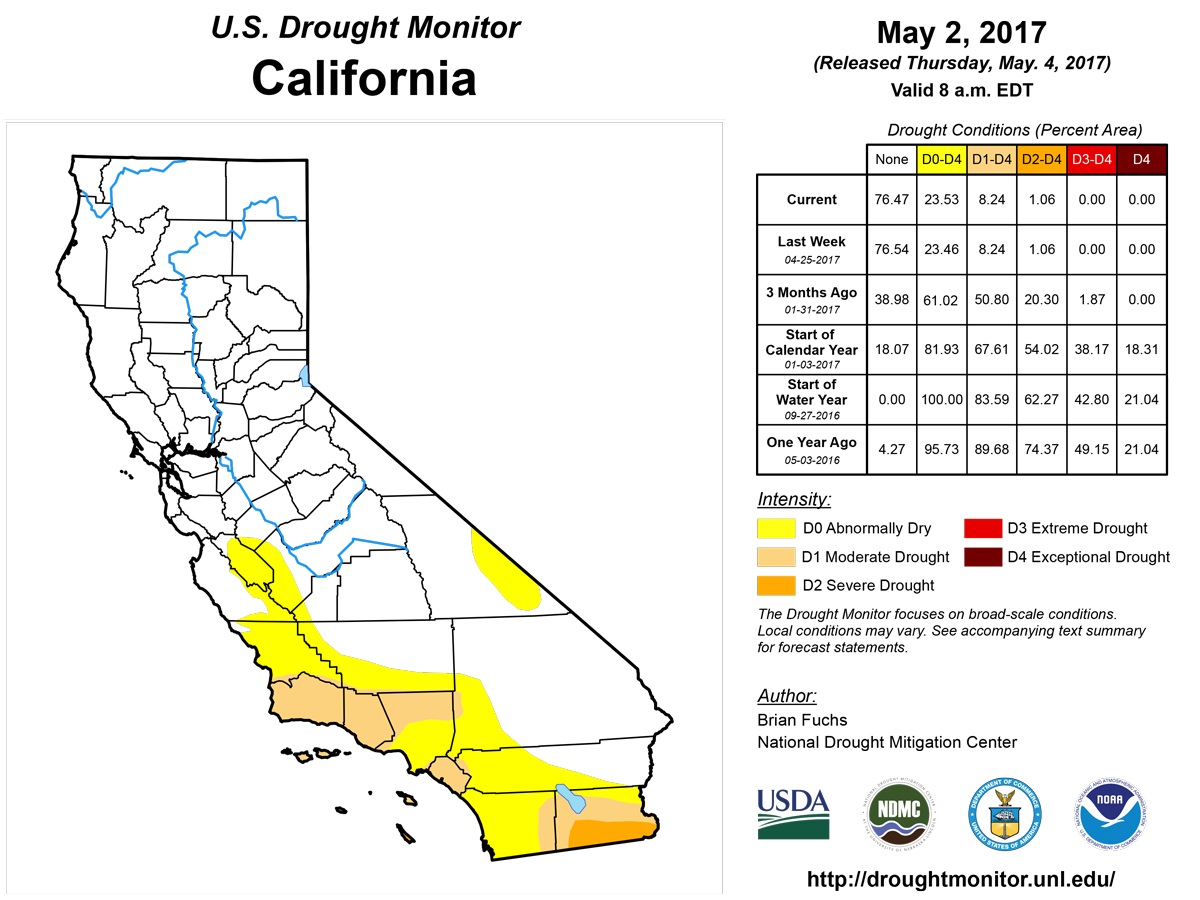 California and National Drought Summary for May 2, 2017

May 4, 2017 - An intense storm developed over the central Plains and moved through the Midwest, bringing with it torrential rains and thunderstorms on the front side and heavy, wet snow on the back side. A wide swath of the country from eastern Oklahoma through Arkansas, Missouri and into Illinois recorded over 5 inches of rain with the event. Portions of western Kansas and the Oklahoma Panhandle recorded several inches of snow, with some places over a foot. The Southeast remained dry as well as much of the Southwest. Long-term drought issues still linger in the Northeast even with the wet pattern of the last several months. Snow was still accumulating in the upper elevations of the Rocky Mountains, with water managers making room for the anticipated runoff.

Much of the region recorded above-normal precipitation and above-normal temperatures for the week as good rains fell at the end of the period. Below-normal precipitation was observed from Connecticut into northern New Jersey and into much of Maryland and Delaware as well as northern Virginia. The region has been characterized by short-term wetness and long-term dryness, and lingering impacts from the long term are still influencing the drought depiction in the region. As the impacts slowly respond, small improvements are being made, but the elimination of dryness and drought in the region will be slow. This week had improvements to the D0 in Maine, eastern Massachusetts, Vermont, New Hampshire and central Pennsylvania. Moderate drought was improved over Vermont and New Hampshire as well as Pennsylvania.

Temperatures were 3-6 degrees above normal for the week while above-normal precipitation was very spotty and associated with thunderstorm activity. Many areas of Florida, southern Georgia and the coastal Carolinas were dry this week. Portions of Mississippi, Alabama, northern Georgia, central Tennessee, and North Carolina recorded over 200 percent of normal precipitation. The drought depiction included both degradation and improvements as there are separate drought areas in the region. Improvements to the long-term drought were made in Alabama, Mississippi, and northern Georgia, and also in North and South Carolina, where a full category of improvement was shown over most areas. The short-term drought areas in southern Georgia and Florida had degradation, as a full category change in intensity was observed where precipitation was minimal. A new area of extreme drought was added in central Florida as impacts associated with the drought are worsening.

Too much moisture is the common theme throughout the Midwest where planting delays and water (flood) issues are rampant. A strong storm system slowly moved through the region on April 29-May 1, bringing with it soaking rains. Portions of southern Missouri received 9-12 inches of rain with the event and almost the entire Midwest recorded at least an inch of rain last week. Drought is not an issue in the region, with no drought or abnormally dry conditions being depicted anywhere at this time.

The week was mixed over the region; it was dry in the Dakotas but wet over much of Nebraska and Kansas as well as the plains of Colorado. The same storm system that brought the rain to the Midwest also brought rain and snow to both Kansas and Nebraska. Significant snow totals were associated with this storm for this time of year. In Kansas, Tribune had a storm total of 22 inches; Wallace, 21 inches; Hugoton, 17 inches; Russell Springs, 16.5 inches; and Ulysses, 15.5 inches. In Nebraska, Maywood had 12 inches; Miller, O’Neill, and Newport, 10 inches; Eustis, 8.4 inches; and Lexington, Bertrand, and Sumner, 8 inches. Moisture in the region allowed for improvement to drought and dryness in the region. All moderate drought was removed this week from Nebraska and eastern Colorado and only 2 small pockets of moderate drought remain in northeast Wyoming. Abnormally dry conditions were also improved over all of Kansas, western South Dakota, eastern Colorado, and southern Nebraska. Only a few pockets of dryness remain in the region.

Heavy rains of up to 8 inches were recorded over portions of eastern Oklahoma and into northern Arkansas, with snow in the Oklahoma panhandle. Even with the recent rains, pockets of short-term dryness remain in eastern Oklahoma, northern Texas, northeast Louisiana, and western Arkansas. Improvements to moderate drought and abnormally dry conditions were made this week over Oklahoma, northeast and west Texas, western Arkansas, and Louisiana. A new area of moderate drought was introduced over north central Texas while southern Texas had moderate drought expand slightly.

Precipitation over New Mexico, the Pacific Northwest, and the Rocky Mountains was the highlight of the week. The precipitation over the Rocky Mountains and into northern New Mexico allowed for improvements to be made this week, with moderate drought reduced and abnormally dry conditions improved. Dryness over western Colorado and eastern Utah allowed for a new area of abnormally dry conditions to be introduced this week. Montana received above-normal rainfall in April, which allowed for the abnormally dry conditions that had previously been associated with below-normal snowpack to be removed. Over the last several months, dryness over western New Mexico and eastern Arizona has developed, and this area will need to be monitored closely for degradation in the near future.

Improvements were made over most of Hawaii this week as a recent “Kona Low” brought widespread precipitation to the state. Abnormally dry conditions were removed from Niihau, Kauai, Oahu, Lanai, and Kahoolawe. On both Maui and Molokai, moderate drought was removed and only abnormally dry conditions remain. The Maui County Water Supply Department dropped their stage 1 voluntary water conservation request as a result of improved reservoir levels. On the Big Island, severe drought was improved over the north Kona district and the southern Kau district. The east side of the Big Island also had abnormally dry conditions removed.

Over the next 5-7 days, another storm system will impact the Midwest with good chances of heavy rain from Missouri northeast into Michigan. Heavy rains are anticipated along the Gulf Coast from Louisiana to the Florida panhandle, with up to 3-4 inches projected. Much of the eastern third of the United States will see rain, with only southern Georgia and Florida on the lower end of the forecasted amounts. Temperatures will be below normal over the eastern United States as the wet pattern will suppress daily highs. Warmer than normal conditions are anticipated over the High Plains, northern Rocky Mountains and into the Great Basin, with departures of 12-15 degrees above normal anticipated.