California and National Drought Summary for May 23, 2017 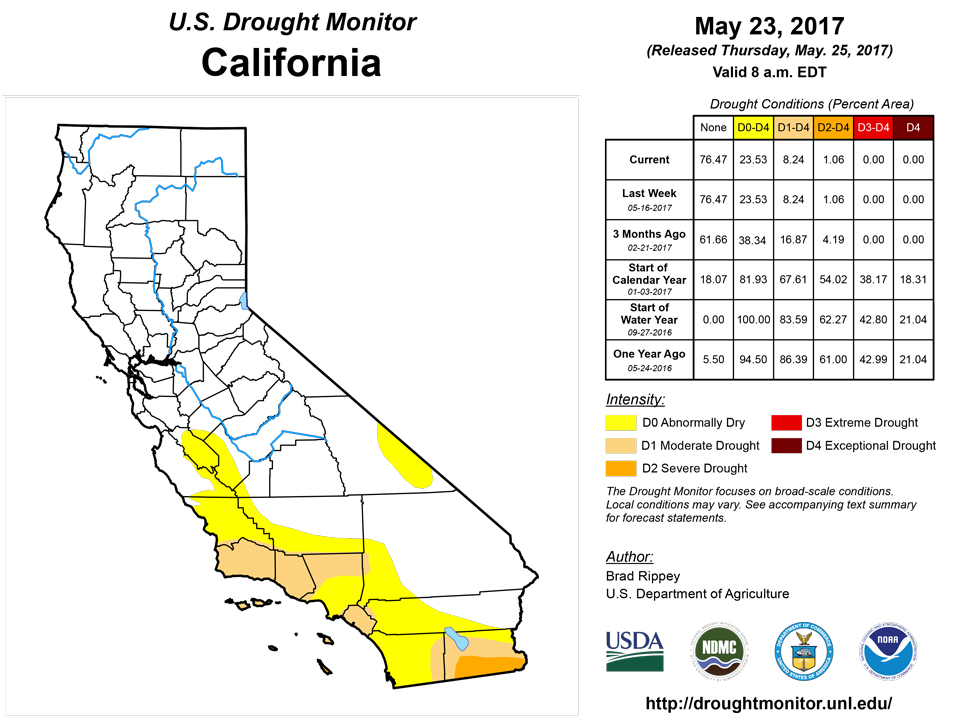 California and National Drought Summary for May 23, 2017

May 25, 2017 - Soaking precipitation occurred from central portions of the Rockies and Plains into the upper Midwest, mainly from May 16-18, and in parts of the Southeast starting on May 20. Drought-affected areas of the Southeast, including portions of Alabama and Georgia, experienced substantial relief, with rain still falling when the drought-monitoring period ended on May 23. The drought-easing effects of any rain that fell after 8 am EDT on Tuesday, May 23, will be reflected on next week’s map. Farther west, late-season snow (locally 1 to 3 feet) blanketed the northern and central Rockies, while streaks of heavy rain largely arrested drought development in the south-central U.S. Areas that remained stubbornly dry included parts of the north-central U.S. and Florida’s peninsula, although significant rainfall developed in the latter region after the monitoring period ended on May 23.

The Northeast experienced a break from heavy precipitation, resulting in a week of status quo, following recent eradication of all remaining drought. During a brief heat wave, monthly record high temperatures were tied on May 18 in locations such as New York’s LaGuardia Airport (97°F) and Burlington, Vermont (93°F). By May 23, lingering pockets of long-term dryness (D0) were mostly limited to Connecticut, Maryland, and Pennsylvania. New York led the nation on May 21 with topsoil moisture rated 55% surplus, according to the U.S. Department of Agriculture. On the same date, Northeastern pastures rated good to excellent ranged from 55% in Delaware to 100% in Connecticut.

Starting on May 20, periods of torrential rainfall struck many areas of the Southeast. On May 20 in Alabama, for example, daily-record totals reached 8.15 inches in Montgomery; 4.37 inches in Mobile; and 2.65 inches in Birmingham. For Montgomery, it was the wettest May day on record (previously, 5.23 inches on May 9, 1978), and the wettest day during any time of year since September 26, 1953—when 8.72 inches fell. Due to the extreme nature of some of the recent Southeastern rains, drought improvements of one to locally two categories were noted. In Montgomery County, Alabama, which includes Montgomery, all dryness and drought was removed; last week’s depiction had included a mix of abnormal dryness (D0) and moderate drought (D1). Similar improvements were introduced in other Southeastern areas where heavy rain fell. After the monitoring period ended, substantial rain developed across Florida’s peninsula and also spread across other parts of the Southeast. The rain that fell after 8 am EDT on May 23 will be reflected on next week’s map. By the monitoring cutoff, however, conditions remained dire across Florida’s peninsula due to a combination of heat and drought. Tampa, Florida, achieved high temperatures of 98°F on May 17 and 19, tying a monthly record originally set on May 26, 1975. Tampa narrowly missed its all-time record of 99°F, set on June 5, 1985. The Southwest Florida Water Management District (SFWMD) voted on May 23 to increase water restrictions in its 16-county jurisdiction, after reporting an 11-inch rainfall deficit since the start of the dry season last October. This represents the district’s driest dry season, with records dating back more than a century. Among the new SFWMD restrictions is a once-per-week limit on lawn watering, with that mandate in effect through August 1, 2017. Through May 23, year-to-date rainfall totals in Florida included 4.62 inches (35% of normal) in Orlando; 5.07 inches (47%) in Naples; 5.57 inches (52%) in Fort Myers; and 5.86 inches (51%) in Tampa. On May 21, Florida continued to lead the nation in topsoil moisture rated very short to short (78%) and pastures rated very poor to poor (60%).

The Midwest remained drought free, although a new area of abnormal dryness (D0) was introduced in northern Minnesota. Through May 23, month-to-date rainfall in International Falls, Minnesota, totaled just 0.78 inch (39% of normal). Most other areas of the Midwest have endured an extended period of cool, cloudy, rainy weather, leading to agricultural fieldwork delays and leaving topsoil moisture rated one-third to one-half surplus on May 21, according to the U.S. Department of Agriculture, in Indiana (46% surplus), Wisconsin (44%), Illinois (35%), and Iowa (35%).

A stripe of heavy precipitation from the central Rockies into the upper Midwest erased pockets of abnormal dryness (D0) in Nebraska and reduced coverage of dryness and moderate drought (D0 and D1) in Colorado. Rain also trimmed D0 coverage in the eastern Dakotas. However, precipitation mostly bypassed the remainder of the Dakotas, leading to further expansion of D0. In addition a new area of moderate drought (D1) was introduced in the vicinity of the Missouri River. On May 21, South Dakota led the entire northern U.S. in topsoil moisture rated very short to short (29%), as well as rangeland and pastures rated very poor to poor (19%), according to the U.S. Department of Agriculture.

Just as dryness (D0) and moderate to severe drought (D1 to D2) was ramping up across the south-central U.S., heavy rain struck many areas. In particular, streaks of heavy rain across Texas, Oklahoma, Louisiana, and Arkansas led to significant reductions in the coverage of dryness and drought. Some of the heaviest rain, locally 4 to 8 inches or more, fell from north-central Texas into east-central and northeastern Oklahoma. Still, the rain largely bypassed a few areas, including the lower Rio Grande Valley, leaving the drought designation intact or even leading to local deterioration. In McAllen, Texas, temperatures reached or exceeded 90°F on 27 of 29 days from April 25 – May 23, missing only May 7 and 8. During that 29-day span, McAllen’s rainfall totaled just 0.31 inch. On May 21, the U.S. Department of Agriculture noted that topsoil moisture was 100% very short to short in the lower Rio Grande Valley. Farther east, abundant rain fell in most places, although northern Mississippi was one area being monitored for possible drought expansion.

Concerns in the West remained minimal, with less than 5% of the 11-state area covered by moderate to extreme drought (D1 to D2). Further, storminess across the central Rockies and environs led to further reduction in the coverage of abnormal dryness (D0) and moderate drought (D1), mainly in Colorado. On May 18-19, Cheyenne, Wyoming, was blanketed with 14.3 inches of snow, while snowfall ranged from 1 to 3 feet at several locations in the central Rockies. Farther south, however, warm, dry, windy conditions necessitated an eastward expansion of D0 across southern New Mexico. On May 21, topsoil moisture in New Mexico was rated 55% very short to short, according to the U.S. Department of Agriculture. On the same date, rangeland and pastures were rated 29% very poor to poor in Arizona, up 14 percentage points from a week ago, and 23% very poor to poor in New Mexico. Near Globe, Arizona, the Pinal fire—started by lightning on May 8—has burned more than 3,500 acres of timber and chaparral in rugged terrain.

There were no changes to the depictions for Hawaii, Alaska, and Puerto Rico. In Hawaii, locally heavy showers were confined to windward locations. However, leeward Hawaiian areas continued to benefit from heavy rain that fell a few weeks ago. Meanwhile, a warm weather pattern prevailed across Alaska, with temperatures topping the 70-degree mark at some interior locations. Bettles, Alaska, posted a daily-record high of 69°F on May 16, followed by a high of 71°F (not a record) the next day. Alaska’s precipitation was mostly confined to the southern tier of the state, but well south of the existing dry (D0) areas. From May 18-21, rainfall totaled 4.67 inches in Yakutat and 2.97 inches in Juneau. Sitka noted consecutive daily-record totals (1.09 and 1.79 inches, respectively) on May 20-21. Elsewhere, parts of Puerto Rico have begun to trend drier in recent weeks. Although introduction of abnormal dryness (D0) is not yet warranted in Puerto Rico, short-term indicators such as streamflow will need to be carefully monitored if dryness persists. Through May 23, month-to-date rainfall in San Juan, Puerto Rico, has totaled just 1.90 inches (43% of normal). San Juan’s March-April rainfall totaled 12.29 inches (185% of normal).

A storm system in the vicinity of the central Appalachians on Thursday will drift northeastward, reaching coastal New England by May 26. Meanwhile, a low-pressure system will cross southern Canada, with a disturbance along the storm’s trailing cold front affecting the nation’s mid-section during the Memorial Day holiday weekend. On Friday, soaking rains will end across the Northeast, while showers and thunderstorms will develop from the northern Intermountain West into the lower Midwest. Rain will quickly spread eastward and return to parts of the southern and eastern U.S. during the weekend. Elsewhere, mostly dry weather during the next 5 days will be limited to just a few areas, including California and the Southwest.

The NWS 6- to 10-day outlook for May 30 – June 3 calls for the likelihood of below-normal temperatures from the central and southern Plains to the western slopes of the Appalachians, while warmer-than-normal weather should prevail along the Atlantic Seaboard and across the northern High Plains and much of the West. Odds will be tilted toward near- to above-normal rainfall across most of the country, but drier-than-normal conditions can be expected from the Pacific Northwest into the upper Midwest.