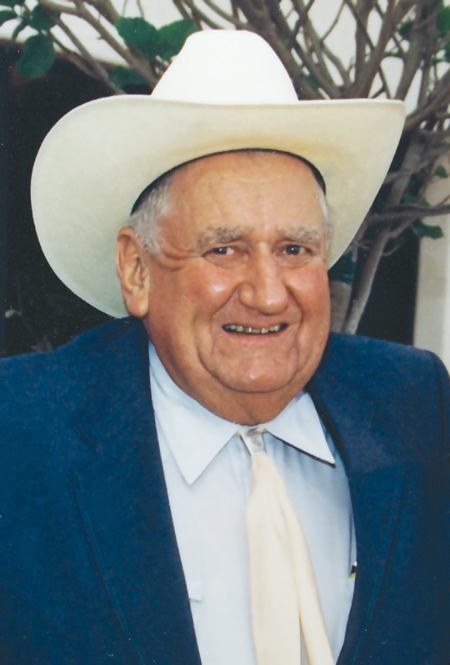 Frank Lee Long, Jr., a third generation Californian, cattle rancher and former member of the Board of Supervisors, passed away from natural causes on December 19, 2015 at his ranch in the Buckeye District of the Guadalupe Valley of Mariposa County. He was 89 years of age.

He was born in Modesto, California on February 19, 1926 to Frank Lee Long, Sr. and Ardella Eralena Long (Hackett).

He is survived by his wife of 65 years Frances Ruby Long (Gumber) and sons Mark Long (Donnelle) and Marshall Long (Robin) all of Mariposa.

Frank spent his early years growing up in Snelling before moving to Dunlap with his family and ranching on the former Peoples Ice Company Ranch where he attended Dunlap Elementary School and Reedley High School. His family then moved to Orange Cove on the Hill’s Valley Ranch. He was active in the FFA raising registered Duroc hogs while in school.

Frank met his future wife Frances at a dance at the Odd-Fellows Hall in Centerville. They were married on August 5, 1950.

Early on he served as den father to a group of Cub Scouts and as a Little League baseball coach. When his sons were involved in 4-H and FFA his time and equipment were always available.

He operated a commercial cow/calf business on the family ranch and in conjunction with his sons raised registered Polled Hereford cattle and grain hay. He pastured the riding and pack horse and mules from Yosemite for many years.

He was a man of vision for the growth and prosperity of Mariposa County and a conservator of the land and water.

While serving on the Mariposa County Board of Supervisors from 1968 to 1980 he was instrumental in persuading the board to implement the Williamson Act (Land Conservation Act) bringing economic relief and stability to the agricultural industry.

House numbering was another accomplishment of his, working with the board, making it easier for emergency personnel to locate residences and businesses throughout the county.

As a member of the Board of Supervisors he served in many capacities including: Chairman of the Board in 1970, ’71 and ’77, representative to County Supervisors Association of California where he served on several CSAC committees, Regional Council of Rural Counties organizer and board member, Mountain Counties Air Basin organizer and chairman, Local Agency Formation Commission chairman and member, Juvenal Justice Commission member, Mariposa County Water Agency, Mariposa County Library-History Center Committee, Mariposa County Historic Sites and Records Preservation Commission, and Mountain Counties Water Resources Association Member and chairman.

He was the co-organizer of the Mariposa County Pioneer Wagon Train started in 1976 as Mariposa County’s contribution to the Bi-Centennial of the United States. The wagon train continues to this day and he is a Wagon Master Emeritus. It was through his knowledge of the area that the remains of the Cannonball Stage were located on the Gordon Ranch along Agua Fria Creek and the Cannonball was restored and is in use and displayed at the Mariposa County Museum and History Center.

Frank was the Wagon Master for the California Sesquicentennial Wagon Train from 1997 through 1999.

Yosemite Bank was organized by Frank and other local citizens in 1977 as a home grown and owned bank. He served a director of the bank for many years.

He was the Chairman of the 125th Anniversary Celebration of the Mariposa County Courthouse and Mariposa Gazette, Heritage of Law and Press.

Frank was initiated into the Independent Order of Odd-Fellows in 1947 making him a 68 year member of the Order. He was a Past Grand of Mariposa Lodge No. 39 and a Past District Deputy Grand Master for District 56 in 1981 and 1983.  He lived the Odd-Fellow’s Creed of ‘to visit the sick, relieve the distressed, bury the dead and educate the orphan’.

He was initiated by Ammatua Chapter of E Clampus Vitus in 1954 at the centennial celebration of the Mariposa County Courthouse and Mariposa Gazette. He was a 61 year member of the Clampers.

He coordinated the resurrection of the Civil War re-enactment which is now led by the Las Mariposas Civil War Group and is still held on the Long Ranch annually.

His counsel was sought out by many individuals and he often offered monetary assistance without expecting compensation.

He was preceded in death by his parents and his brother Cameron Francis Long.

Services will be held on Saturday, January 9th, 2016 at 1:00 p.m. at the Mariposa Funeral Home, 4981 9th Street, Mariposa, CA. Interment will follow at the Odd-Fellows Cemetery located at the intersection of Joe Howard Street and Fournier Road. A reception will be held at the Masonic Hall at 5154 Jones Street afterward. For more information call 209-966-7654.