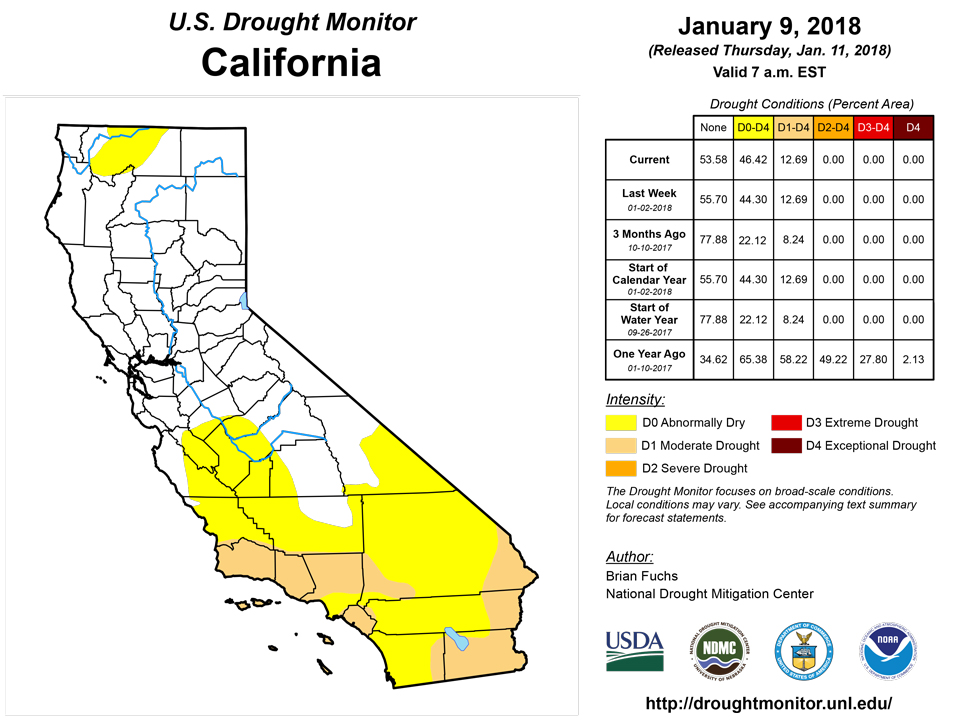 January 11, 2018 - Dryness continues over most of the country with only isolated areas of above-normal precipitation for this week. The “snow drought” over much of the mountainous western United States is catching more attention, but there is time to make up the poor start to the current water year. Portions of California and coastal Washington did have good precipitation for the week, along with areas of southern Louisiana, east Texas, and southern Mississippi. A significant winter storm brought precipitation to many areas along the east coast from Florida to Maine, but this did not reach too far inland. Over the last 60 days, extensive areas of the country have recorded below 25 percent of normal precipitation, from the Southwest into the central Plains and Midwest as well as in the Southeast and into the Mid-Atlantic. Cold air has also dominated much of the Midwest and eastern United States, with departures from normal temperatures in the Mid-Atlantic 15-20 degrees below normal.

Conditions were fairly dry, overall, for the Northeast this week, with only areas along the coastal regions and northern New England recording precipitation amounts over 1 inch. Most precipitation has been in the form of snow as cold air has dominated the region with temperatures well below normal. Even with the impact of a strong winter storm on the coastal regions, the associated precipitation did not allow for improvements to the drought status. Abnormally dry conditions were actually expanded over more of northern Vermont and New Hampshire as well as northeastern portions of New York state. The streamflow values in the region are low for this time of year and coupled with the dryness being observed, the situation will need to be monitored closely for the development of drought.

Precipitation was widespread over much of Missouri and into the Ohio River Basin, and with the cold temperatures, much of this was in the form of snow. With the cold weather dominating the region and soils freezing up, drought issues move slow this time of year. No changes were made this week to the region as the impact of the precipitation in the region will be slow to materialize. There are some dry pockets in both Wisconsin and Michigan that are not labeled as abnormally dry yet; these will be monitored in the coming weeks.

A dry week for the region, but also a very cold week, with most of the eastern portions of the region recording temperatures 5-10 degrees below normal. Dryness over the last 3 months has been a concern, even during the fall and winter months. Moderate drought conditions were expanded over all of eastern Colorado, western Kansas and more of central Kansas. Severe drought was also expanded over southwest Kansas while a new area of extreme drought was introduced along the Oklahoma border where less than 10 percent of normal precipitation has been recorded over the last 90 days.

At the end of the current United States Drought Monitor period, the area from east Texas into southern Louisiana and southwest Mississippi recorded 1-2 inches of precipitation. A few areas that were abnormally dry did warrant improvements, but most areas welcomed the precipitation. In Arkansas, abnormally dry and moderate drought conditions were expanded in the central portion of the state while no changes were made in Louisiana. The dryness over the Texas and Oklahoma panhandle regions continued with an expansion of moderate and severe drought conditions this week and an introduction of extreme drought in Oklahoma. As of January 9, some areas of the Oklahoma and Texas panhandles and southern Kansas have gone 95-100 straight days with less than 0.10” of precipitation, with several locations reporting no precipitation at all during that time. Extreme drought also expanded in northern Texas. Moderate drought and abnormally dry conditions were also expanded in portions of central, southern, and west Texas.

The story over the region has been the slow start to the current water year with the lack of both rain (in the lower elevations) and snow (in the upper elevations). The anomaly has been the northern Rocky Mountains in that the wet pattern over the last several weeks has allowed for a full category improvement to the drought status over Montana with all areas of extreme drought being removed this week. In the central Rocky Mountains and Four Corners regions, drought conditions continued to intensify, with moderate and severe drought expanding over Colorado, New Mexico, Utah, and southern Wyoming. Abnormally dry conditions were introduced into Oregon, northern California, and western Idaho this week in response the dryness. Heavy rain at the end of the period brought the first significant rainfall to southern California and portions of the desert Southwest this winter, bringing with it mudslides and flooding as the rain saturated areas burned earlier.

Over the next 5-7 days, precipitation is widespread over much of the contiguous United States, with all but areas of the Southwest expecting to record some precipitation. The Pacific Northwest and northern Rocky Mountains are anticipated to have significant precipitation with liquid amounts of 3-4 inches along the coasts of northern California, Oregon, and Washington as well as over much of northern Idaho and western Montana. Significant precipitation is also anticipated over the Ohio River Valley and into the Mid-Atlantic, where 1.50-2.50 inches of liquid precipitation is forecast over widespread areas. Cooler than normal temperatures are anticipated over most areas east of the continental divide with departures of up to 15 degrees below normal while the western areas are anticipated to be warmer than normal with departures of 5-10 degrees above normal.The 6-10 day outlooks show that the trend of warmer over the West and cooler over the East will likely continue. Temperatures have the greatest chance of being below normal over the Mid-Atlantic into the Southeast and above normal over the Southwest. Precipitation chances are projected to be greatest over the Great Basin and Pacific Northwest as well along the Mississippi River Valley. Drier than normal conditions are anticipated to mainly be over the areas of west Texas and southern New Mexico as well as along the coastal regions of the Southeast, with higher than normal chances of dry conditions along much of the east coast.