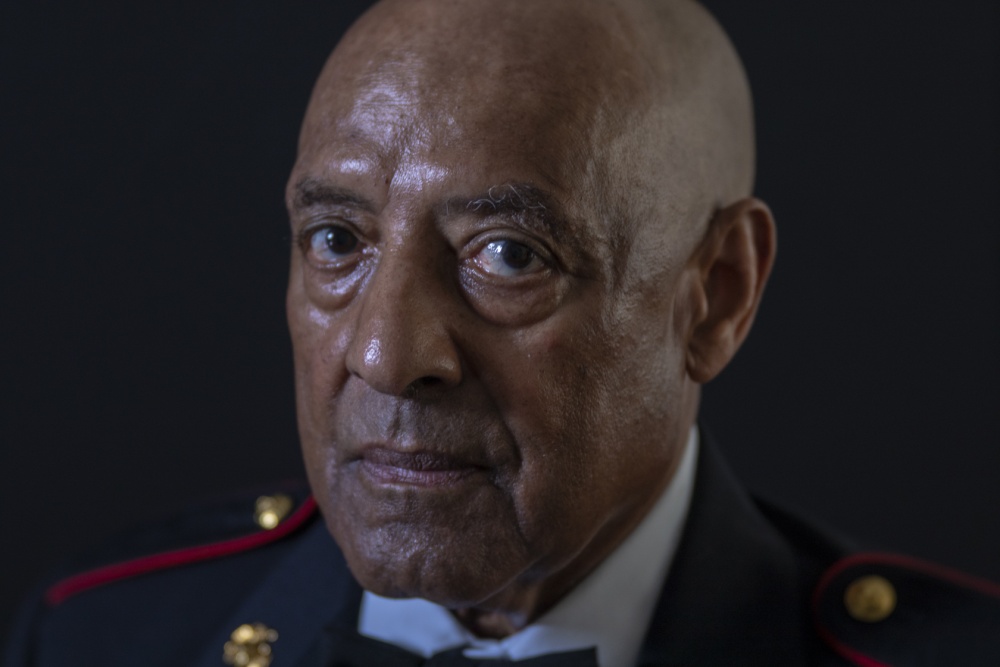 A portrait of retired SgtMaj. John L. Canley, taken July 9, 2018. President Donald J. Trump will be awarding the Medal of Honor to Canley during a White House ceremony, October 17, 2018, for his heroic actions during the Battle of Hue City while serving in Vietnam. Canley will be recognized for his actions from Jan. 31 to Feb 6, 1968, during the Tet Offensive where he braved enemy fire to save his men. (U.S. Marine Corps photo by Sgt. Erik Estrada)

Sergeant Major John L. Canley will receive the Medal of Honor for his actions from January 31 to February 6, 1968, while assigned to Company A, First Battalion, First Marines in the Republic of Vietnam.  While serving as Company Gunnery Sergeant, he fought off multiple enemy attacks as his company moved along a highway toward Hue City to relieve friendly forces who were surrounded.  On several occasions, despite his own wounds, he rushed across fire-swept terrain to carry wounded Marines to safety.  When his commanding officer was severely wounded, he took command and led his company into Hue City.  While in command of the company for three days, he led attacks against multiple enemy-fortified positions while exposing himself to enemy fire to carry wounded Marines to safety.  On February 6, at a hospital compound, he twice scaled a wall in full view of the enemy to aid wounded Marines and carry them to safety.  Then-Gunnery Sergeant Canley’s heroic actions saved the lives of his teammates.

THE MEDAL OF HONOR:

The Medal of Honor is awarded by the President, in the name of Congress, to members of the Armed Forces who distinguish themselves conspicuously by gallantry and intrepidity at the risk of their own lives above and beyond the call of duty while:

There must be no margin of doubt or possibility of error in awarding this honor.  To justify this decoration, the deed performed must have been one of personal bravery and self-sacrifice so conspicuous as to clearly distinguish the individual above his or her comrades, and must have involved risk of life.
Source: Office of the White House