November 17, 2020 - SAN FRANCISCO — With California’s 2020 harvest season—marked by the dual challenges of COVID-19 and record wildfires—behind them, vintners across the state are expressing excitement about the quality of the vintage. Following a cool, mild growing season, an August heat spell accelerated ripening, resulting in an early start to harvest—one to two weeks ahead of normal in most regions. The crop is expected to be smaller than average.

A recap of the 2020 harvest will be presented at a webinar, “The Winemaker Sessions,” on Tuesday, Nov. 17 at 10:00 am Pacific Time. A panel of internationally recognized vintners and winegrowers from across California will discuss trends, challenges and opportunities in 2020. To attend this event, register here. 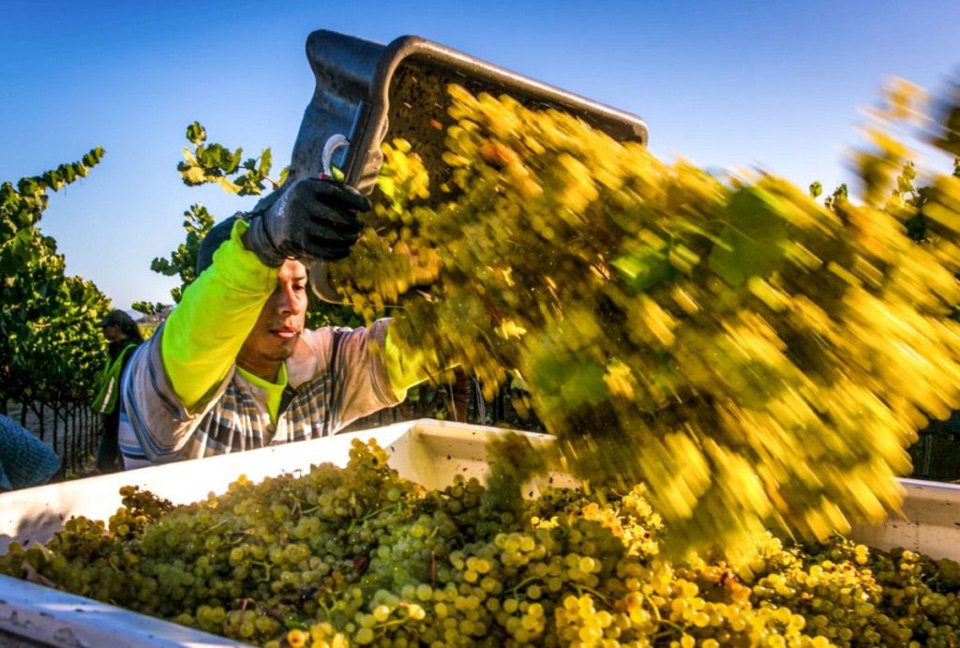 While the wildfire season impacted many individual vintners and growers in some regions, the blazes affected a small percentage of the industry overall. Of the 4,200 wineries in California, fewer than 20 reported significant damage to wineries. In regions that experienced wildfires, growers and winemakers are working together to assess and mitigate any smoke exposure issues.

“A dry winter with just half of the region’s typical rainfall, was followed by a warmer-than-average summer. Berries were small, with concentrated flavors. “That’s typically a good recipe for quality,” said Jon Ruel, CEO of Trefethen Family Vineyards in Napa.

Napa Valley’s white wines fared especially well. “The Chardonnay has wonderful fruit character and great stone fruit flavors,” he added. “It’s a little lower in acid than normal, reflecting the warmer vintage. I also think this is going to be a classic vintage for our Riesling.” Ruel decided not to pick some later-ripening reds due to smoke concerns, however other Napa wineries are assessing their red wines and will likely produce Cabernet Sauvignons and other reds. “I’ve had a chance to taste our Pinot Noir and Cabernet Franc,” he said, “and they taste great.”

Corey Beck, CEO and head of winemaking at Francis Ford Coppola Wineryin Sonoma County, is also optimistic about the vintage. Based on small-batch fermentation trials, he said, “It was like, ‘Oh my god, these wines are terrific.’ The bones and the quality of the vintage are there. What we picked and what the consumer is going to see is going to be absolutely incredible.”

Winemaker Comments from Across the State

For Kosta Browne Winery, which produces wines from five coastal appellations, growing conditions were nearly ideal, with the exception of some spring frost in the Russian River Valley that reduced yields, said winemaker Julien Howsepian. In the Sta. Rita Hills in Santa Barbara County, the vines enjoyed a long, leisurely growing season. “I found the flavors in our Pinot Noirs to be sensational at a very early stage.”

In Lodi, vintners overcame challenges stemming from mid-season heat spikes and wildfire smoke. “While Lodi sustained many days of poor air quality,” said Markus Bokisch, owner/winemaker at Bokisch Vineyards, “sensory analysis coupled with lab results showed no smoke impact to the wines. Despite the heat spikes, he added, “The fruit retained its acidity. Phenological ripeness was excellent, leading to fully flavored wines at lower Brix. We are very pleased across the board, but I would say that the later-season reds, such as Tempranillo, Cabernet and Petite Sirah, will be exceptional in our area.”

For vintners in the Sierra Foothills region, warm weather signaled an early start to the season, followed by a mild summer with only one or two heat spells.

“I’ve rarely seen the fruit come in so balanced at relatively lower Brix levels,” said Justin Boeger, winemaker at Boeger Winery in Placerville, El Dorado County. “Our Italian varietals, Negroamaro and Aglianico, really stood out, with the Barbera making a strong showing as well. Not to stray into hyperbole, but I think 2020 will be one of our best vintages of the last decade.”

In the Central Coast, a cool spring and mild summer temperatures extended the growing season. Harvest timing was average, and yields were typical.

“I think it will be more of a balanced year,” said Nicholas Miller of Miller Family Wines, owners of the Bien Nacido & Solomon Hills Estate Wineries in Paso Robles and Santa Maria Valley. “In Paso Robles, Cabernet came in short in several areas as did our Chardonnay. With no immediate fires around our vineyards, we have felt good so far about the quality of that wine and tests have supported that,” said Miller. “In Santa Maria Valley, we’re pretty excited about what we’re seeing with Pinot Noir. We see potential for some great wines from 2020.”

Chad Melville, head winegrower at Melville Winery in Lompoc, Santa Barbara County, reported a near-perfect growing season. “This year’s fruit was intense, vibrant and beautiful,” Melville said, “Generally speaking, the Pinot Noirs have been darker than usual and they’re more vibrant. We haven’t started fermenting the Syrah yet, but it looks and tastes really good. And Chardonnay has more intensity.”

In Temecula, April brought record rains that challenged vintners with increased mildew pressure. Triple-digit temperatures in late August and early September caused some desiccation and sunburn for later-ripening varieties. “Fruit quality overall was very solid, and while the vintage might be a riper year due to the heat, I believe we managed it well,” said Jon McPherson, master winemaker at South Coast and Carter Estate wineries. I would say 2020 is better than 2019 in respect to richness and depth of character.”