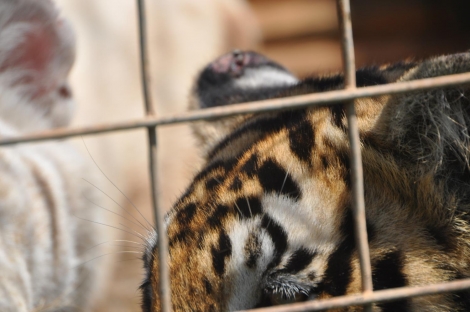 The complaint alleges violations of the Endangered Species Act and the Animal Welfare Act and asks the court to declare that defendants have violated and will continue to violate the Endangered Species Act by illegally taking, possessing, and transporting protected animals, and the Animal Welfare Act by exhibiting without a license and placing the health of animals in serious danger.  The complaint also asks the court to require the defendants to relinquish certain animals to the United States, to cease violating these laws, to award the United States costs, and to grant other relief as appropriate.

“The Lowes’ failure to provide basic veterinary care, appropriate food, and safe living conditions for the animals does not meet standards required by both the Animal Welfare Act and the Endangered Species Act,” said Principal Deputy Assistant Attorney General Jonathan D. Brightbill of the Environment and Natural Resources Division.  “Exhibitors cannot evade the law simply by shutting out the USDA and moving their animals elsewhere.  The Department of Justice will support the USDA in pursuing those who violate federal animal protection laws.”

“Animal exhibitors, whether they exhibit in person or on-line, must possess a license and provide adequate care for their animals as provided for by Animal Welfare Act regulations,” said U.S. Department of Agriculture (USDA) General Counsel Stephen A. Vaden.  “This action reflects the priority that USDA places on the enforcement of the Animal Welfare Act.”

In June and July 2020, USDA Animal Plant and Health Inspection Service inspectors found numerous animals in poor health and living in substandard conditions at the Wynnewood facility, in violation of the Endangered Species Act and the Animal Welfare Act.  The Lowes did not provide timely and adequate veterinary care, causing the animals to suffer from easily treatable conditions, in some cases resulting in untimely death.  Animals were not provided with sufficient quantities of appropriate food and were underweight and suffering from nutritional deficiencies, making them susceptible to fractures, unable to stand or walk, and exhibiting neurological problems.

The Lowes also failed to maintain sanitary and safe conditions, resulting in fly strikes on the animals’ bodies.  Fly strike dermatitis is a preventable condition in which flies continuously attack, bite, and penetrate the skin of an animal.  The flies lay eggs on open or irritated skin, causing infestations of maggots and painful sores.  Inspectors also found foul-smelling, partially burned and decomposing big cat carcasses and a broken-down refrigerator truck containing rotting meat.  They found no other properly refrigerated meat on site for the animals.  The Lowes also routinely separated big cat cubs and lemur pups from their mothers at too early an age for public “playtime” events, resulting in long-lasting harm.

As one example of this inhumane treatment, in June 2020, USDA Animal Plant and Health Inspection Service inspectors observed a lion cub named Nala.  The cub was lethargic, depressed, thin, and would not get up out of the mud even after prompting.  She had discharges emanating from her nose and eyes, and sores on her ears. The inspectors directed the Lowes to immediately obtain veterinary care for Nala.  Nala was diagnosed with an upper respiratory infection, dehydration, and urinary tract infection, and was also suffering from fly strikes, parasites, and fleas.  Nala was transferred to a wildlife sanctuary in Colorado in September. She has been diagnosed with malnutrition and vitamin deficiencies so severe as to cause a chronic bone fracture and lameness.

USDA suspended Jeffrey Lowe’s Animal Welfare Act exhibitor license and initiated an administrative action to permanently revoke his license.  Lowe has previously claimed to be above the law and, “If we lose a lawsuit, we simply change the name and open another business someplace else.”  Days later, Lowe unilaterally terminated his license and sought to put his operation beyond USDA inspection and investigation.  The Lowes then moved animals to a property in Thackerville, Oklahoma, located in the middle of a rural, residential area.  The Lowes have made public statements that the new Thackerville facility will be named “Tiger King Park” and will operate as a film set for television shows and other video content.  The Lowes do not have a license to exhibit animals.

The complaint also seeks a court order to permit immediate inspection of the facility, to prevent the Lowes from exhibiting their animals in person or through online platforms, to prevent the Lowes from acquiring or disposing of any animals during the injunction, and for any and all veterinary records for any animals treated during the injunction.

The case is being handled by attorneys from the Environment and Natural Resources Division.  The case is being investigated by USDA’s Animal Plant and Health Inspection Service and the Department of the Interior’s Fish and Wildlife Service.

The year 2020 marks the 150th anniversary of the Department of Justice.  Learn more about the history of our agency at www.Justice.gov/Celebrating150Years.