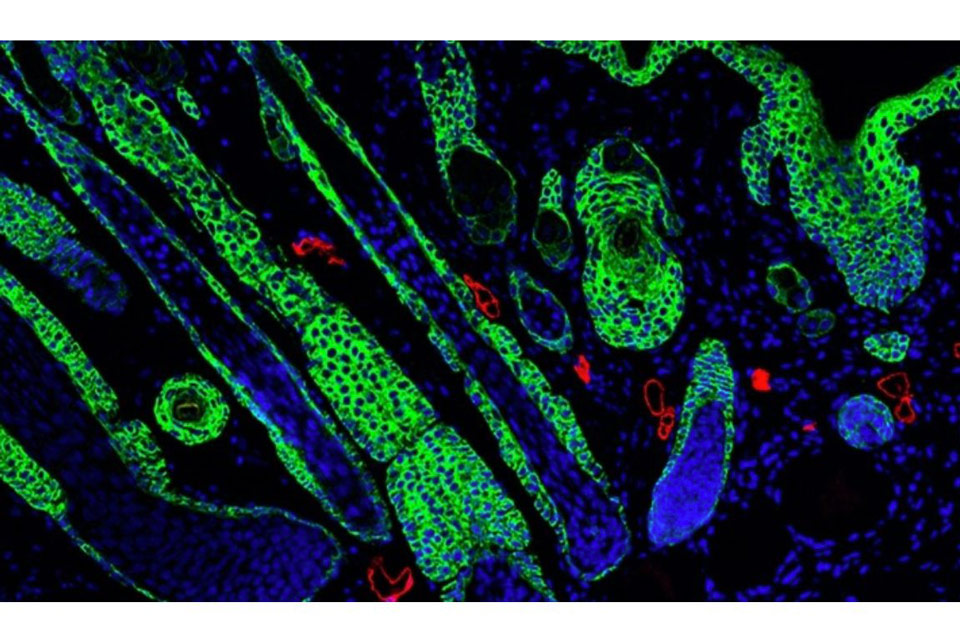 Microscopic image of regenerated hair follicles at the center of a wound; the Keratin 5–positive tips of the follicles appear in green.
Credit: Duke University

November 22, 2020 - UCLA researchers and colleagues have developed a wound-healing biomaterial for cuts, burns and other injuries that could significantly reduce scar formation and result in healthier, stronger skin.

The team, including scientists from Duke University and other institutions, reports in Nature Materials that their new hydrogel triggered an immune response in mice that accelerated healing, induced tissue regeneration and resulted in skin that was more resilient to reinjury.

The advance builds on UCLA’s previous development of wound-healing gels made of injectable microporous annealed particles, or MAPs. MAP gels, when applied to a wound, create a type of scaffolding that allows new skin tissue to latch on and grow within the cavities between the linked particles, reducing scarring. As the gel gradually dissolves, however, it loses the scaffolding support needed for the tissue to repair fully.

In an effort to slow this dissolving process, the researchers switched the type of amino acid they used to link the molecules in the gel. To their surprise, they found that the modified gel disappeared from the wound even more quickly than before but resulted in far less scarring and far better skin regeneration. The answer? The new amino acid, one not found in the body, stimulated an unexpected regenerative immune response.

“There are two types of immune responses that can occur after injury — a destructive response and a milder regenerative response,” said Dr. Philip Scumpia, an assistant professor of dermatology at the David Geffen School of Medicine at UCLA and one of the study’s authors. “When most biomaterials are placed in the body, they are either pushed out like a splinter or walled off by the immune system and degraded or destroyed, but in this study, the immune response to the gel induced a regenerative response in the healed tissue.”

With the new gel, the regenerated tissue in mice was much stronger, with hair follicles and sebaceous glands rather than scar tissue forming over the scaffold.

“The modularity of the chemical and physical properties of the spherical gel building blocks, which we manufacture using scalable microfluidic chips, is a key advantage of the system that enables precise tuning for an optimal tissue response,” said Dino Di Carlo, a senior author of the study and a professor of bioengineering at the UCLA Samueli School of Engineering.