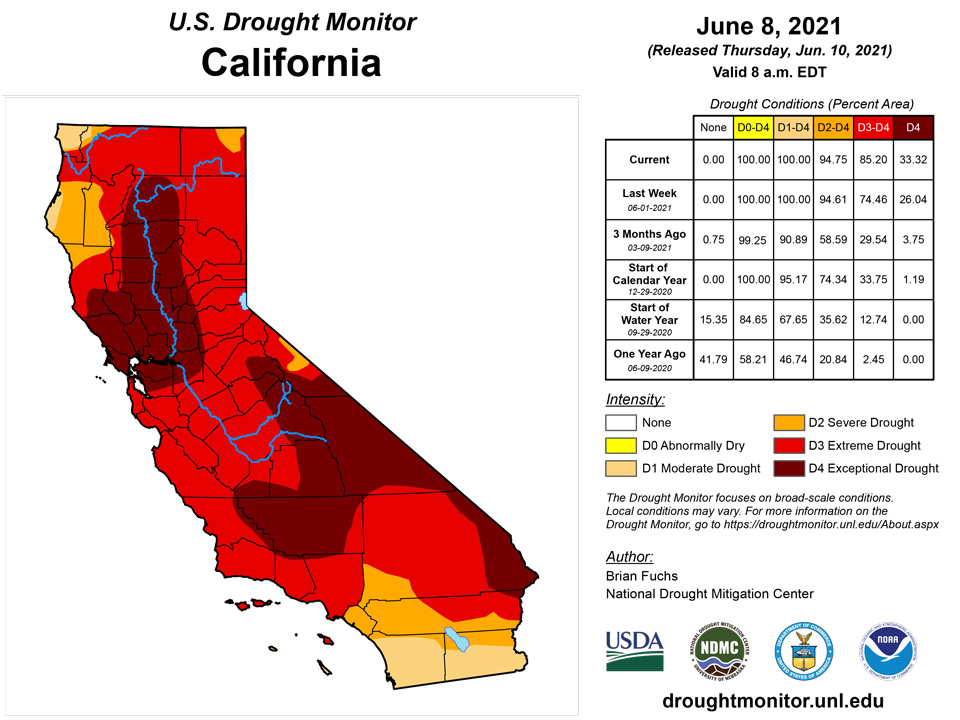 Most of the region recorded above-normal precipitation for the week, with only areas of northern Florida, western North Carolina, and portions of central and southern Georgia below normal. Temperatures this week were near normal to slightly below in the western areas of the region. Where the greatest rains fell along the coastal region of the Carolinas, improvements were made to severe and moderate drought, and the amount of abnormal dryness was reduced. Southern Georgia into northern Florida remained dry with a large expansion of abnormally dry conditions based on the short-term indicators. Central Florida had some rain, which allowed for some improvements to the abnormally dry conditions there. Rain in Tennessee alleviated abnormally dry conditions in the central area and portions of the eastern parts of the state.

Temperatures were cooler than normal in the southern extent of the region and well above normal in the north. Departures were 9-12 degrees above normal in Minnesota and Wisconsin while they were 3 degrees below normal in southern Missouri and Illinois. Outside of western Kentucky, southern Illinois, southern Indiana and into northern Ohio, the rest of the region was drier than normal for the week, with very little rain at all in the upper Midwest. With the short term being quite dry and warm, drought expanded and intensified in much of the region this week. Moderate drought and abnormally dry conditions expanded in Minnesota, Wisconsin, and Iowa, where almost the entire region of each state saw degradation. Michigan had a large expansion of severe drought and moderate drought as well as an expansion of abnormally dry conditions in the upper peninsula. Some slight expansion of abnormally dry and moderate drought took place over northern portions of Illinois and Indiana while some abnormally dry conditions were removed from Indiana and Kentucky.

A mostly dry week for the region, with some late precipitation in the period over North Dakota that will be addressed next week when the full extent of the rains can be taken into account. Some areas of Colorado had above-normal precipitation for the week. Temperatures were well above normal in the Dakotas where widespread areas of 12-15 degrees above normal were observed, with several places over 100 degrees F. Farther south in the region, the temperatures across Kansas were below normal. Portions of southwest North Dakota and northwest South Dakota were reassessed this week to take into account the wetter pattern lately. Improvements to the severe and extreme drought conditions were made based upon this reanalysis of data. In Nebraska, moderate drought and abnormally dry conditions spread over the northeast to central portions of the state, with some severe drought being introduced in the far northern counties. Southeast South Dakota had drought expand and intensify, with more moderate and severe drought being introduced. The plains of Colorado remained wet and further improvements were made to the abnormally dry and moderate drought conditions in the central portion of the state. Degradation took place in Wyoming where extreme drought was introduced in the northeast and moderate and severe drought expanded in the central and southwest portions of the state, with just a small pocket improved in the southwest.

With a continued wet pattern, temperatures were well below normal, with departures of 6-8 degrees below normal in portions of Texas and Oklahoma. The greatest rains fell from east Texas into the lower Mississippi Valley, but there were pockets of heavier rain from south Texas into the central portions of the state. As in past weeks, the wet pattern of the current week as well as a reassessment of conditions over the last 6-8 weeks allowed for continued and multi-category improvements over portions of Texas. The only extreme and exceptional drought left in the state is in the Trans-Pecos region.

A very dry week for the region, with only areas of New Mexico, northeast Arizona, western Colorado and northwest Washington having above-normal precipitation. Temperatures were well above normal with most areas 3-9 degrees above normal for the week. A reassessment of conditions in eastern New Mexico took place after the most recent rains, and this led to improvements in the region, with some being multi-category for the week. Eastern Washington saw conditions continuing to decline, and an expansion of moderate, severe, and extreme drought took place this week. Oregon was similar with widespread areas of degradation in the state and expansion of exceptional, extreme, severe, and moderate drought. Idaho also had widespread degradations with expansion of extreme, severe, and moderate drought and also a new introduction of exceptional drought. California continued to see the impacts of drought increase, and there was expansion of extreme and exceptional drought in the northern and central areas as well as along the coast of central California. A small area of exceptional drought was expanded in central Utah. As with the conditions in the northern Plains, some areas of eastern Montana were reassessed this week and a large area of extreme drought was removed while other areas of the state had an expansion of severe and moderate drought. Some of these same areas improved in Montana received rain after the cut-off for this week and could see further improvements next week.

Some heavy rains on Puerto Rico allowed for improvements on the eastern side of the island, with abnormally dry and moderate drought conditions showing some improvements.

Drought persists across the U.S. Virgin Islands, although increased rainfall in St. Thomas prompted improvement to D1 there. St. Croix and St. John remain in severe drought. King Airport near Charlotte Amalie in St. Thomas has recorded a fairly-typical 6.3 inches of rain in the last 9 weeks, following a four-month period (December 2020 – March 2021) with less than 4 inches of rain. Even though these are the driest months of the year at St. Thomas, the observed totals were less than half of normal.

The first week of June brought about ¾ of an inch of rain to Rohlsen Airport near Christiansted in St. Croix, which is slightly more than normal; however, this followed 10 consecutive months with below normal rainfall. About 23 inches of rainfall has accumulated since August 2020, which is nearly a foot below normal.

Most locations across the U.S.-affiliated Pacific Islands have received sufficient to abundant rainfall the past few months, with impactful dryness limited to the northeastern Marshall Islands and the southernmost sections of Micronesia.

Some sites across the Marianas recorded below-normal rainfall from late winter into spring, which is a relatively dry time of year climatologically. In Guam, 6.7 inches fell during February – April 2021, or about 60 percent of normal. But May rains were more generous, topping 7 inches (170 percent of normal). Significant dryness is not an immediate concern, although rainfall around Saipan was only a few tenths of an inch above normal from May through early June.

Nearly 67 inches of rain doused Airai, Palau from February through early June 2021, compared to a normal closer to 40 inches.

Wet weather has also prevailed from western Micronesia through the southern and western Marshall Islands. Since March 1, totals in Micronesia ranged from about 26 inches at Ulithi to more than 87 inches at Kosrae – both near 150 percent of normal. Farther east, more than 60 inches of rain has doused Majuro since March, about twice the normal amount. Reservoirs there are only about 8 percent below the maximum.

Dryness remains problematic in the long term in southernmost Micronesia, and Kapingamarangi remains at D0(L) this week. Rainfall has increased markedly there since March. During the 10 months from May 2020 through February 2021, Kapingamarangi measured less than 39 inches of rain, or about 55 percent of (30 inches below) normal. Since then, over 47 inches have fallen in just over 3 months, which is almost double the normal. But despite the abundant rainfall of late, the effects of the earlier long-term dryness may be lingering though improving. A more definitive assessment of remaining impacts will occur later this month.

Significantly drier-than-normal weather persists at Wojte. Rainfall totals have not been sufficient to match typical water needs since late last year, and water conservation measures are in place. Since December 1, 2020 [just over 6 months], less than 15 inches of rain has fallen here, which is 8 to 9 inches below normal (63 percent).

In American Samoa, rainfall at Pago Pago has been below normal since spring, but enough to meet most water needs. March 1 – June 7, 2021 brought 26 inches of rain, or about 3/4 normal. In addition, July 2020 – February 2021 were exceptionally wet. More than 140 inches of rain pelted Pago Pago, exceeding normal by over 45 inches.

The 6-10 day outlooks show the high probability of above-normal temperatures over most of the country from the Midwest and southern Plains to the West. Cooler than normal temperatures are anticipated in the East and to the Gulf Coast as well as into the lower Mississippi Valley and Texas. Below-normal precipitation is anticipated over most of the country, with the highest probabilities in the Midwest, northern Plains, northern Rocky Mountains and into the Great Basin. The highest probabilities of above-normal precipitation are along the Gulf Coast, northern Alaska and in Arizona. 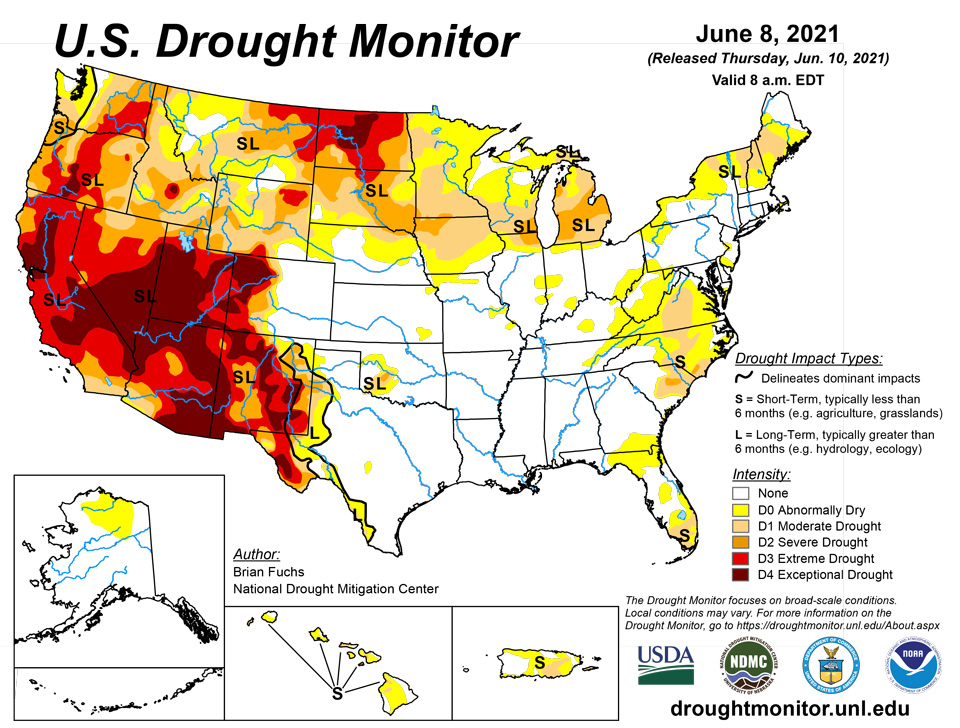