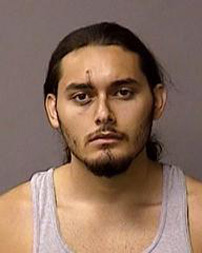 death near the intersection of Martha Ave and 7th Street in Keyes.

Through the course of their follow-up investigation, detectives identified 19-year-old Ruben Perez of Keyes as a suspect.  The murder claimed the life of 16-year-old Modesto resident, Evan Robinson.  Detectives believe a physical altercation ultimately resulted in gunfire and Robinson, who was an innocent bystander, was wounded.

Our investigators determined Perez was on active probation at the time of his arrest and had been attending a series of occupational preparedness courses at the Stanislaus County Day Reporting Center on E. Hackett Road in Modesto.  Perez was previously convicted as a juvenile for assault with a firearm.

As he arrived for class on Wednesday afternoon, June 16, 2021, detectives confronted him and told him he had an outstanding arrest warrant for his involvement in the murder.  They safely took him into custody without incident, transported him to the main Sheriff’s Office for questioning and booked him on the homicide warrant at the Public Safety Center.  Attached you will find an image of murder suspect, Ruben Perez.

The investigation into the death of Evan Robinson is still active and ongoing.  Detective Hickman is the case agent and can be contacted directly at the Sheriff’s Department should members of the community have any additional witness information they want to share.  He can be reached at (209) 525-7042.
Source: Stanislaus County Sheriff's Department