June 23, 2021 - By Christine Souza - The California priority water rights system is being put to the test, as state regulators impose emergency regulations and send 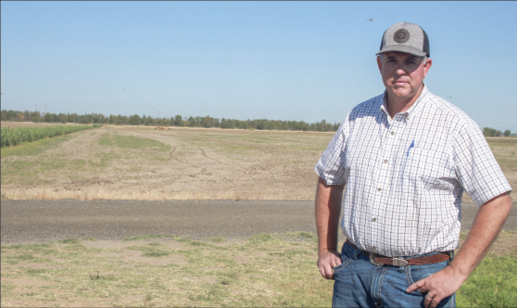 notices of water unavailability to farmers who are trying to negotiate their crops through another drought year.

(Left) Affected by water cutbacks this year, rice farmer Jon Munger of Montna Farms near Yuba City stands in front of an idled field that would have been planted with rice. He says the farm has a mix of junior and senior water rights, including from settlement contractors in the delta watershed.
Photo/Christine Souza

Reacting to worsening dry conditions, the State Water Resources Control Board adopted emergency regulations last week to curtail water diversions in the Russian River watershed in Mendocino and Sonoma counties. The board also sent notices of water unavailability to junior water right holders in the Sacramento-San Joaquin Delta watershed, warning that senior water right holders could be next.

"The whole reason we have a priority system is to deal with scarcity," Scheuring said. "In some years, we're going to be reducing water to some with more junior water rights, and in the wet years, the priority system isn't necessary."

As a result of the water board action, farmers who depend on natural flow from the Russian River, as opposed to stored water from the watershed, may not divert water. The emergency regulations apply to rights of both junior and senior water right holders. The Russian River watershed was the first region of the state to face a drought declaration due to the parched conditions.

In enacting the regulations, the water board characterized agricultural diversions from the Russian River this year as an "unreasonable" use of water—a term that displeased farmers and their representatives.

"Farmers understand California has a cycle of drought years and wet years. What they don't understand is, because of certain public policy planning failures, that instead agriculture somehow becomes an unreasonable use because there's not enough supply to go around," Scheuring said.

"We were hoping to avoid the broad-based regulatory approach," Jones said. "We have been in conversation with state water board staff for several months, and the hope was to avoid a regulatory action through the use of a voluntary drought conservation agreement."

Under a voluntary agreement, she said, water right holders would agree to reductions in water use and distribution of available water among right holders.

"The frequent resort to the 'reasonable use' doctrine is a recipe for conflict, because one person's reasonable use is another person's unreasonable use. It is a very slippery slope," he said.

In the Sacramento-San Joaquin Delta watershed, the water board sent notices of water unavailability to 4,300 right holders, urging them to stop diverting water to preserve dwindling supplies. Letters also informed 2,300 water users with senior water rights that continued drought could affect their ability to divert, as well.

To the north of the delta, rice grower Jon Munger of Montna Farms near Yuba City said the farm is affected by the water cutbacks. It operates with a mix of junior and senior water rights, including from settlement contractors in the delta watershed.

"We do have some land affected by the June 15 notice of water unavailability, which means that we cannot pump, period, unless we have an alternative water source," Munger said. "If the water was here, we would have planted about 700 additional acres."

Overall, he said, the farm left about one-third of its rice acreage unplanted. Munger said the farm had been anticipating the water reductions, and developed its crop plan accordingly. He said many of his rice-farmer neighbors also idled ground due to drought, which ultimately impacts the Montna Farms rice-drying facility.

"We're not getting as much of our own rice coming into the dryer, and a lot of our (rice farmer) customers have water supplies that are cut back," Munger said, "so for the dryer, we're down almost a couple of hundred thousand sacks, which is approximately 50% of our total volume."

Looking ahead, Munger said he is already thinking about what next year may bring in terms of water supply.

"Knowing how dry things are and just the shape of our reservoirs, I think if we get even a normal winter, next year is going to be pretty touchy," he said. "I'm really concerned about just the overall state of the reservoirs. If we had Sites (Reservoir), that would be the supplemental water that could be relied upon in years like this."

The proposed Sites Reservoir, an offstream, surface storage facility to be located in the Sacramento Valley west of Maxwell, would capture and store stormwater flows from the Sacramento River for release in dry and critical years.

In other California water news, Gov. Gavin Newsom announced the appointment of Nichole Morgan of Sacramento to the state water board. Morgan, the assistant deputy director of financial assistance for the board, has held other water agency positions and worked in the field of engineering. She would replace retiring board member Tam Doduc.

(Christine Souza is an assistant editor of Ag Alert. She may be contacted at csouza@cfbf.com.)

ABOUT CALIFORNIA FARM BUREAU FEDERATION
The California Farm Bureau Federation works to protect family farms and ranches on behalf of nearly 32,000 members statewide and as part of a nationwide network of more than 5.5 million Farm Bureau members.
Source: Reprinted with permission CFBF