September 15, 2021 - The world saw little relief from the heat in August. The month finished as the sixth-warmest August on record, following a record-hot July. Across the Northern Hemisphere, this summer tied as the second hottest on record, according to scientists at NOAA’s National Centers for Environmental Information.

Climate by the numbers

The average global land and ocean surface temperature in August was 1.62 degrees F (0.90 of a degree C) above the 20th-century average of 60.1 degrees F (15.6 degrees C), making it the sixth-hottest August in the 142-year record.

Regionally, Asia had its second-warmest August on record—behind August 2016—and Africa had its third warmest. North America, South America and Oceania all had an August that ranked in the top-10 warmest. Although August 2021 was warmer than average across Europe, it was the coolest August since 2008.

Globally, nine of the 10 warmest Augusts have all occurred since 2009.

June through August 2021 was the Northern Hemisphere’s second-hottest meteorological summer on record, tied with 2019 and just slightly cooler than the summer of 2020.

The season, which also marks the Southern Hemisphere’s winter, was Earth’s fourth warmest on record at 1.62 degrees F (0.90 of a degree C) above the 20th-century average. Nine of the 10 warmest June-through-August periods have occurred since 2010.

According to NCEI’s Global Annual Temperature Rankings Outlook, it is very likely (> 99.0%) that 2021 will rank among the 10-warmest years on record. 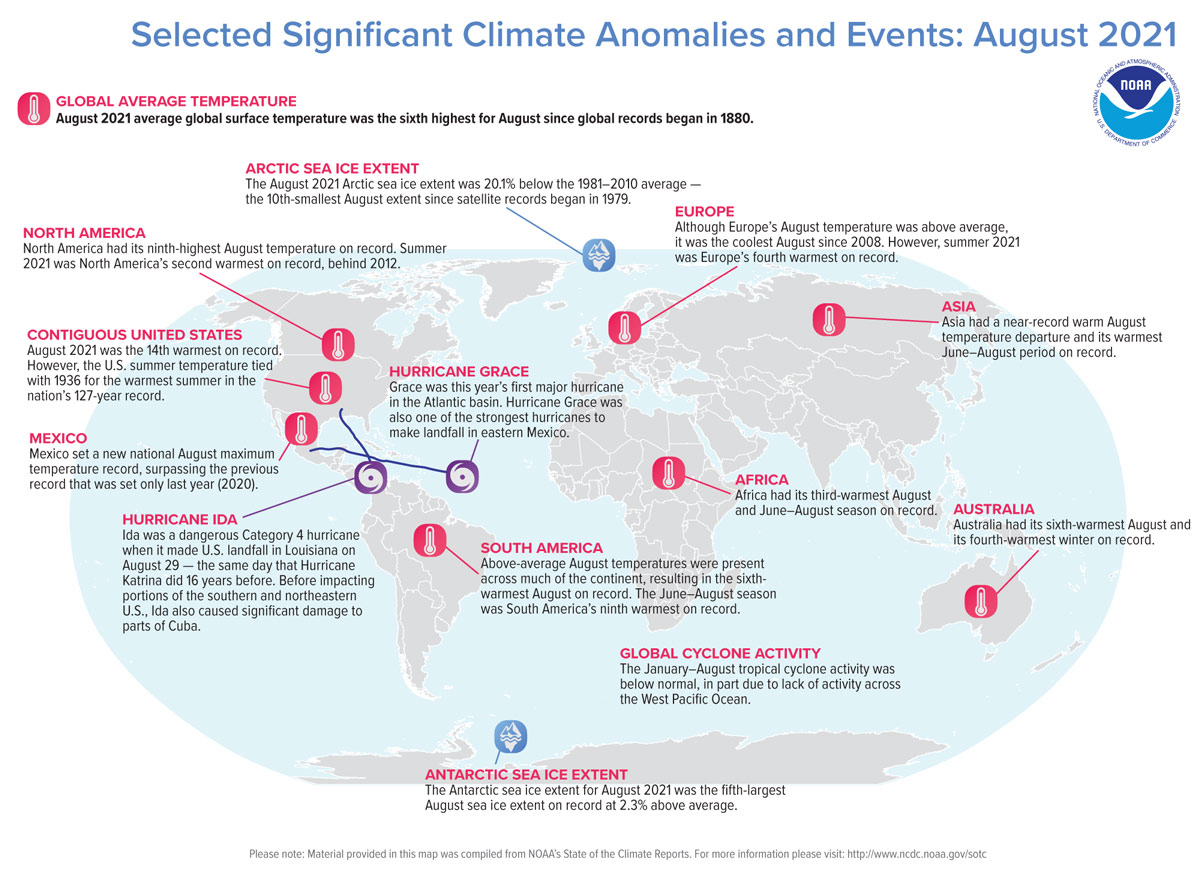 A map of the world plotted with some of the most significant climate events that occurred during August 2021. Please see the story below as well as more details in the report summary from NOAA NCEI at http://bit.ly/Global202108. (NOAA NCEI)
Download Image

A sweltering season for some continents: Asia had its warmest June through August on record, while North America and Africa had their second- and third-warmest, respectively. South America, Europe and Oceania all had a top-10 warmest June-through-August period.

Tropical activity varied around the globe: The Atlantic basin had above-average activity last month—with six named storms—including three hurricanes, two of which became major hurricanes (Grace and Ida). The West Pacific basin had below-normal activity with only four named storms and no typhoons during the month. Overall, the global tropical cyclone activity for 2021 so far has been below average, due in part to the lack of activity across the West Pacific Ocean.