Woodland Elementary student one of 576 chosen

to compete in national math competition

Jonah Dacanay beat almost 50,000 applicants across 43 states to qualify for the Chicago event

March 26, 2017 - Mariposa, CA - A student from Woodland Elementary in Mariposa, CA has qualified to compete in the National MathCON 2017 Finals. There were approximately 50,000 online round participants from across the country.   MathCON 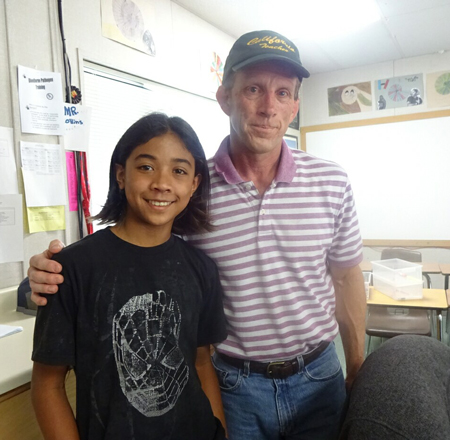 is a prestigious academic competition hosted by Concept Schools every year in Chicago during April. The National MathCon 2017 Finals will be held at the University of Illinois on April 22.

Among the 576 finalists chosen was Jonah Dacanay a 7th grader at Woodland Elementary.

(Left) Jonah Dacanay spends time after school preparing for the upcoming National MathCon Finals with Woodland Elementary School Math Teacher Rob Collins. Mr. Collins has been working with the Woodland 7th and 8th grade math team since the fall. To prepare for the first round test, Mr. Collins and the Woodland math team met daily during lunch period.

Students nationwide from all types of schools, including home-schooled children, in the middle and upper grades compete across several mathematical disciplines: algebra, geometry, measurement, data analysis, number systems and pre-calculus. They take an online assessment to qualify and compete in the finals at the University of Illinois at Chicago going head to head—brain to brain.
Students from 43 states took the initial exam to qualify for MathCON. The day-long event will bring together both elementary and high school students to compete for various prizes and national prestige through various math questions and activities.

MathCON was created in 2008 by Concept Schools as a Midwest competition with just 125 participants, and has since grown to a national event. MathCON’s goal is to engage students in STEM outside of the classroom, and encourage more students to enter the STEM fields, which are currently some of the fastest-growing industries in the United States.

“We’re incredibly proud when any of our students earn recognition for their accomplishments, and we’re so excited to have Jonah Dacanay advancing to the finals.” Woodland Elementary Principal Lydia Lower said. “The STEM field is such an important part of the future, and we actively encourage our teachers and students to find fun ways to use STEM inside and outside of the classroom. This is a great honor not only for Jonah but also for Woodland Elementary.”

“MathCON is our way of inspiring the future leaders in science, technology, math and engineering by engaging students at a young age, making STEM fun and demonstrating its real-world applications,” said Ayhan Caputlu, Director of Mathematics Education at Concept Schools, which organizes the event. “The competition allows us to reach students from all over the nation and help them establish, improve and maintain skills that can lead to many possibilities throughout their educational careers and beyond.”

In addition to the finals testing, students at this year’s competition will enjoy a math comedy show, a pizza party with other participants, while also having the chance to play an array of STEM-related games. For a full agenda, visit mathcon.org.

http://www.kmov.com/story/31766058/news-4-schools-rockwood-middle-schoolers-test-math-skills-in-national-contest for media coverage.Woodland School
Woodland School is a K-8 school located in Mariposa, County, a rural community in an area which is noted for its variety of tourist attractions including ski slopes, gold rush history, hunting, fishing, horseback riding, boating, backpacking and Yosemite National Park. Woodland’s campus is spread out over an area of approximately 7 acres, with grass and beautiful oak tress interspersed throughout the campus. Woodland is a Distinguished School and takes pride in the education offered to its students.
Source: Woodland Elementary School