June 16, 2021 - McKITTRICK, Calif.— In response to a petition from the Center for Biological Diversity, the U.S. Fish and Wildlife Service announced today that the Temblor legless lizard may qualify for protection under the Endangered Species Act.

The legless lizard is a rare, sand-swimming reptile that occupies a very small area of habitat near the Temblor Range on the southern end of the San Joaquin Valley. The animals are jeopardized by oil and gas drilling. 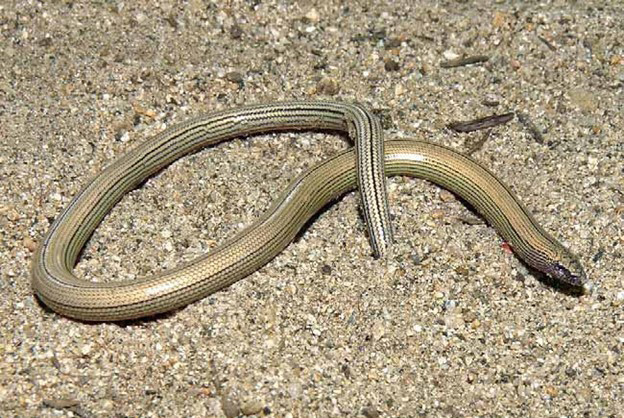 “This is an important step toward federal protections for these rare lizards, which face major threats from oil drilling,” said Tamara Strobel, a staff scientist at the Center. “There are only four known locations where this species exists, and most of its habitat is surrounded by oil and gas wells. It’s time to protect legless lizards from the rampant drilling in Kern County that’s destroying habitat and accelerating climate change.”

The Service will begin a status review of Temblor legless lizards, whose entire range on the east side of the Temblor Mountain Range is less than 200 kilometers long. The majority of the lizard’s habitat is privately owned and highly developed for oil and gas drilling.

The oil and gas industry damages lizard habitat by compacting the soil, changing moisture levels, removing plant cover and the leaf-litter layer, and releasing oil spills and chemicals. The legless lizards are highly sensitive to the noise and light generated by drilling operations. Climate change, wildfires, invasive species, and habitat loss from urban development and the construction of large-scale solar projects are also threats to the lizard’s survival.