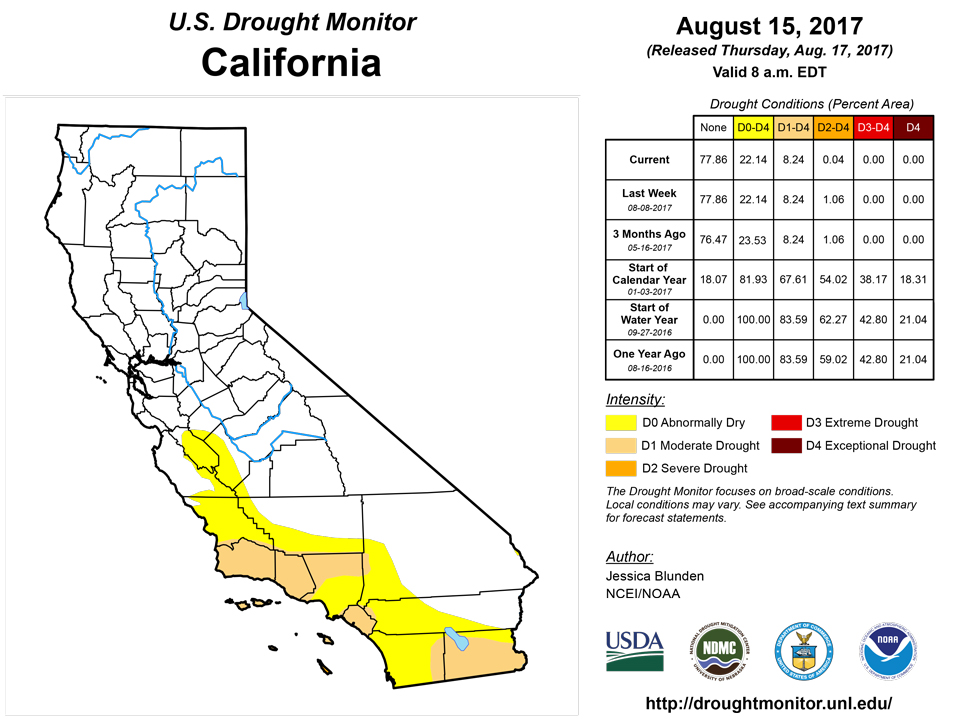 August 17, 2017 - Temperatures were cooler than average for much of the contiguous U.S. this week, including 4-8 degrees F below average across a large part of the Plains and Midwest this past week. Only Washington and Oregon saw temperatures more than 4 degrees above average for the period. With the below-average temperatures came a lot of rain in some regions, notably across northern Texas and much of Oklahoma, where rainfall was more than 600% of normal for this time of year. There were also substantial rains in parts of Wyoming, Nebraska, parts of the Dakotas, and in many places across the southeast. Rainfall was below average in southern Texas, parts of the midwest, northeast, and northwest, particularly notable in Montana where wildfires are prevalent.

Dry conditions continued in parts of Maine and moderate drought (D1) conditions expanded through the central coastal counties. Abnormally dry (D0) conditions were notable in southeastern Massachusetts down to the Cape Cod Canal and across southern Rhode Island. Rainfall deficits of 2 inches are reported since the beginning of July, streamflows have become low, and cranberry growers have been irrigating over the past two weeks.

Only North Carolina and Virginia reported abnormally dry (D0) conditions across the southeast, with no reports of drought thanks to adequate rainfall this summer. In North Carolina, abnormally dry (D0) conditions were alleviated from the southern eastern coastal plains, with rainfall in excess of 2 inches. However,with less rain received and lingering dryness, streamflows were below average farther toward western Piedmont. With some areas of Chatham, Lee, Randolph, and Moore Counties seeing 4-5 inch deficits over the past two months abnormally dry conditions were introduced. In Virginia, heavy rainfall over the past week improved short-term dry conditions in southern coastal regions and part of the southwest.

Heavy rain, in excess of 6-8 inches in some locations, fell across much of this region over the past week. The rain was particularly welcome for areas that had been experiencing dry conditions, especially northern Texas and central to western Oklahoma. So much rain fell in these regions that all dryness was completely alleviated across several broad swaths and led to 2-category, and even the rare 3-category, drought improvements in Oklahoma, from severe drought to normal conditions in Beckham and part of Roger Mills Counties in the west and parts of Kingfisher, Blaine, Canadian, and Oklahoma Counties in the central part of the state, receiving well over 5 inches in places. One resident reported that Roger Mills County is the greenest they have ever seen in August. Two-category improvements were also notable around the Texas panhandle from the previous week, including along the Texas, Oklahoma border and around Roberts and Hutchinson Counties. Conditions also returned to normal at the Texas-Louisiana-Arkansas border and in part of east-central northern Mississippi. However, northeastern Mississippi missed out on the heavy rains and abnormally dry (D0) conditions expanded slightly to the east and north.

Rainfall helped in some areas, but lack of adequate precipitation worsened conditions in others. Abnormal dryness (D0) was introduced in western and southern Portage, northern Stark, and eastern Medina Counties in northeastern Ohio, where rainfall over the past month has been less than 20% of average. In Michigan, dry conditions over the past month were evident across larger portions of the south and abnormally dry conditions expanded northward to Kalamazoo, Barry, eastern Kent, southern Montcalm, Shiawassee, Clinton, and southwestern Genesee Counties. Similarly, short-term dryness is now evident farther south in part of central to west central Indiana where adequate rainfall is lacking. In two small regions of southern Iowa (eastern Union, Clarke, most of Lucas, southern Warren and southeastern Madison Counties and to the east, central Wapello County), dryness over the past two to four months warranted degradation to extreme drought (D3). Wapello was also very dry during the last growing season. Extreme drought conditions were also expanded slightly west and north in the south. Moderate drought (D1) expanded in southwestern and far northeastern Iowa, reflecting dryness over the past four months or so. Louisa County in the southeast Iowa is a bit drier and moderate drought is now apparent in part of Wright and Franklin County in north central Iowa. However, rainfall in excess of 2 inches over the past week did help to improve conditions in the northwestern part of the state. Moderate drought now encompasses all of Marshall County in northwestern Minnesota,where low streamflows are reported and fire danger is rated high.

With the recent rainfalls, conditions returned to normal in northwestern Kansas along the Nebraska border and across extreme southern Kansas. In southwestern Nebraska, moderate drought shrank (D1) in Perkins, Chase, Hayes, and Lincoln Counties, following precipitation totals of up to nearly 4 inches. Likewise in the Nebraska panhandle, normal conditions prevail once again across eastern Box Butte, northeastern Morrill county, and northern Garden Counties, thanks to precipitation totals of 1.5-2.5 inches over the past week. Heavy rain also erased remaining dryness in Laramie County, Wyoming. Conditions improved to abnormally dry (D0) in parts of Custer, Blaine, and Loup counties in central Nebraska after two consecutive nights of heavy rainfall. Moderate drought also shrank slightly in north central Holt and south central Boyd counties, where up to 3.5 inches of rain fell. And normal conditions returned to a swath from Ewing to Atkinson in Holt County. Some areas in South Dakota received 3-7 inches of rain over the past week, contributing to improving conditions in some northeastern, north central, and south central pockets. However, the west was not as fortunate. Extreme drought (D3) creeped farther west in Meade County while severe drought (D2) expanded in Jackson. In southwestern North Dakota, rainfall helped alleviate exceptional drought (D4, the worst category), although due to the extremely poor growing conditions, it remained around the Hettinger County area. Conditions also improved in Colorado. Normal conditions returned around the Denver metro area and in Phillips County in the northeastern corner of the state.

In far southern California, drought conditions in Imperial County have now improved to moderate (D1) as long-term drought continues to plague this area and nearby regions. Conditions also improved around eastern Nevada into western Utah as abnormally dry (D0) conditions returned to normal in most of region, save for a region encompassing part of southwestern White Pine and northeastern Nye Counties. Conditions also returned to normal in the Unita Mounains at the Utah / Wyoming border. In Montana, abnormally dry conditions extended southward to the Wyoming border, encompassing more of northern Beaverhead and most of Madison Counties. There have been recent reports of water shortages in Beaverhead, Madison, Gallatin, Jefferson, Park Counties. Ninety-eight percent of the topsoil rated short to very short in Montana and fire danger is high.

With adequate rainfall over the past few weeks, the remaining area of moderate drought (D1) in south central Alaska vanished, along with a substantial region of abnormally dry (D0) conditions from the western Interior and eastern Seward Peninsula to southwestern and south central Alaska. In Matanuska Valley, hay cut one month prior remained on the ground due to harvested crop moisture. Ponding water was also reported in the southwest. Additionally, forest danger has been deemed “Low” on signs around the region. However, dryness has become apparent around the Copper River Basin, where Gulkana and other valley elevation sites received around half of their typical precipitation over the past month.

Conditions in southern Puerto Rico continued to deteriorate and abnormally dry and moderate drought conditions creeped westward and northward. Rainfall deficits up to 10 inches for the year. Soil moisture is low and there have been several bush fires have been reported along the coast.

While no changes were made in Hawaii this week, Lihue, Hawaii reported a 10-day streak with temperatures reaching 88-90°F. This follows Lihue’s hottest July on record, with a mean temperature of 81.1°F, surpassing the previous record of 80.8°F set just two years prior in 2015. Rainfall through August 13 was just 40 percent of normal.

For the week of August 16-23, rain is forecast across most of the contiguous United States, save most of the western quarter and part of eastern to southern Texas. Rainfall may be in excess of two inches or more in some areas that will significantly benefit, including much of the Plains from North Dakota south through Oklahoma, parts of the midwest where dry conditions have recently creeped in, and across much of the East Coast states. Over the next few days, temperatures are broadly forecast to be in the 70s to 80s across much of the northern tier and 80s to 90s across much of South. Temperatures in the 90s and higher are likely limited mostly to Texas, southwestern Arizona, and southern California.