August 7, 2019 - By Ching Lee - As California's wildfire season heats up, commercial ranchers and other livestock owners brace for possible power outages that could hinder their ability to 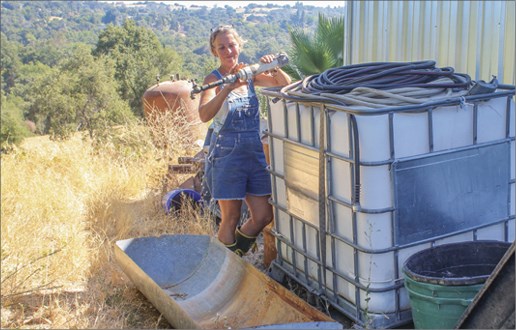 provide water for their animals.

(Left) Placer County rancher Karin Sinclair shows the container she would use to haul water to her livestock during an emergency, such as if there is a loss of power and she cannot pump from her wells and if the animals lose access to surface-water sources.
Photo/Ching Lee

Energy companies may need to cut power as a preventive measure during wildfire conditions, as required under directives from the California Public Utilities Commission. Although Pacific Gas & Electric Co. has stated its public safety power shutoffs could potentially affect any of its more than 5 million electric customers, the customers most at risk are those who live in locations defined as high fire-threat areas. The utility suggests preparing for outages that could last longer than 48 hours.

Holly Foster, whose family runs cattle in Butte and Plumas counties, said her ranch lost power during a shutoff in June that affected Butte, Napa, Solano, Yolo and Yuba counties. After losing power for nearly a week last year during the Camp Fire, Foster said she began implementing backup measures "more aggressively" this year, so that she has an alternative power source to pump water to her cattle.

Her cattle in Butte County are particularly vulnerable because she relies on electricity to pump water from wells. When she lost power last year, it was not only problematic for the cattle, she said, but it reduced her ability to protect the ranch's buildings and other infrastructure.

"It definitely changed our strategy in dealing with fire risk that we face every year and have always faced in that area," Foster said.

The loss of power meant she had to move generators and update wiring because the pumps are not set up to where "you can just flip a switch" and plug the generator into it, she said. This took time, labor and "a fair bit of investment," she added. For smaller operations with just a few animals, "those sorts of investments start to become cost-prohibitive," she said.

In her region, Theresa Becchetti, a University of California Cooperative Extension livestock and natural resource advisor for Stanislaus and San Joaquin counties, said many ranchers rely on surface water from creeks or stock ponds, but those with irrigated pasture need pumps to supply drinking water for livestock and for irrigating pastures.

Small ranchette owners also depend on electricity to pump water, she said, and if the power goes out, they would need generators or would have to haul water. She noted that most ranchette owners and some medium-sized ranchers have day jobs off the ranch, and if the outages are unplanned, scrambling to find water becomes an extra expense while adding stress on owners and livestock. When temperatures reach into the triple digits, "animal welfare is of utmost concern for livestock owners," she added.

"My guess is there are many more horse people who would be affected than large ranchers," Becchetti said.

As a horse owner who also runs a horse boarding facility in Sonoma County, Stephanie Arata said her horses would be fine for a day or two until they drink down the water in the troughs, after which she would rely on a generator to pump more water. But she noted many horse owners do not have this setup and use small, automatic waterers that fill as the horses drink—and those systems must be powered at all times.

"People certainly are thinking about how they would deal with (power outages)," she said.

Water requirements vary depending on the species, the size of the animal, temperature, range conditions, water content of forages and other factors. Beef cattle, for example, consume 10 to 20 gallons of water per head per day, whereas a mature horse needs about 12 to 15 gallons, and sheep and goats drink about 1 to 2 gallons, according to the U.S. Department of Agriculture.

Depending on the day and time of year, there could be several hundred animals or a few thousand on the premises of the Shasta Livestock Auction Yard in Cottonwood, with heavy times during spring and fall. For this reason, the yard has already spent thousands of dollars on a backup system and a plan in preparation for PG&E blackouts, said Cris Carlson, auction production manager for the yard.

The auction facility spans 93 acres, with nine power meters on the premises. Not only is power needed to run its sales operation, Carlson said, but the yard must keep feed and water for all the animals being housed for the sales. That means having to buy generators and battery backups, as well as renting additional generators to power the sales ring, computers, scale, well and hay chopper.

"It won't be business as normal, but we will be able to operate and keep the animals safe and healthy," she said.

With ponds and creeks running through her property in Newcastle, a gravity-fed irrigation system and backup wells, Placer County rancher Karin Sinclair said she's not so much worried about providing water for her cattle and sheep as she is about keeping her cold-storage facility in Penryn running should she lose power. That facility, which does not have a generator, keeps all her meat products and provides storage for other ranchers. She said she's considering alternative power sources for it.

Being in the foothills and a high-risk area for wildfires, she said her pigs and chickens would be the hardest to get water to if a fire came through and surface water is diverted for firefighting. She would then need to rely on wells or resort to transporting water.

"The hardest thing with the pigs right now is they have to have water to cool off," she said, noting that their paddocks must be wet down two to three times a day to keep the animals comfortable.

Greg Norris, state engineer for the USDA Natural Resources Conservation Service, said ranchers should think about installing new pumps or retrofitting existing ones that accommodate easy hookup to a generator. This would be less expensive than installing more storage tanks.

NRCS helps ranchers fund and install hundreds of stock-water systems every year, he said, and those systems already figure in several days of extra water storage for emergency backup, but the designs typically don't include hookups for generators.

"This is a new consideration that we probably need to be thinking about," Norris said.

A PG&E webpage with information about available back-up generation resources and vendors may be found at www.pge.com/backupgeneration.

(Ching Lee is an assistant editor of Ag Alert. She may be contacted at clee@cfbf.com.)
Reprinted with permission: California Farm Bureau Federation