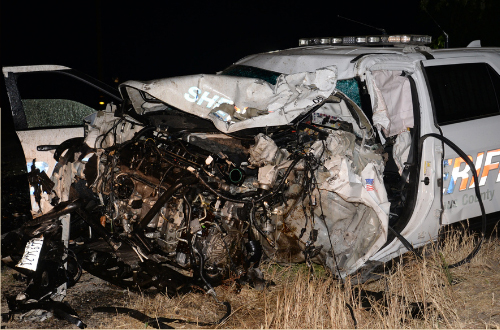 Our helicopter identified a person matching the description outside of his home on Hickman Road.  Aldaz appeared to be armed with a black rifle.  Patrol deputies established a command post from a safe, contained distance about one mile down the road.  Traffic was restricted to keep bystanders out of the area.

To avoid an armed confrontation with someone possibly possessing a handgun, long-gun rifle, and a knife, we continued with negotiations.  Aldaz was drinking alcohol walking in and out of his home and seen entering parked cars on the property.  Every effort was made to preserve public safety and avert an unnecessary use-of-force situation.

Occupants and nearby residents were asked to evacuate.  Our deputies reached Aldaz on the telephone to de-escalate and negotiate a peaceful resolution.  Aldaz engaged in an open dialogue with a trained negotiator but did not surrender peacefully.

Negotiations ended when Aldaz said he was prepared to end his life.  He left his home driving a pickup truck north on Hickman Road at speeds over 100 miles-per-hour towards our command post of deputies, patrol cars, and armored SWAT vehicle.  Fortunately, deputies were able to run to safety in a nearby orchard.

The pickup truck collided with three of our unoccupied patrol cars, catching fire and overturned in the nearby orchard.  Deputies rushed to help Aldaz and pulled him from the burning truck and began rendering medical aid.  Paramedics assumed treatment for transport to a local area hospital where Aldaz later died from his injuries.

Our investigators are reviewing body worn and helicopter camera footage. Later, we will be releasing video footage for the public. The California Highway Patrol investigated the crash and no deputies or community members were injured.  The attached photograph depicts one damaged patrol car.

Members of the community are urged to contact Detective Summerton at 209-525-7032 if they have witness information to share.  Tipsters can choose to remain anonymous by calling Crime Stoppers at 1-866-602-7463 or download the P3 Tip application for your mobile device.  Callers could be eligible for a cash reward in certain instances.