Letter to the Editor - What An Embarrassment! 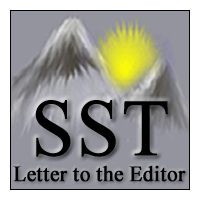 December 18, 2019 - The office of the President of the United States demands respect. This is the highest office in the free world, one that also heads the world's largest economy for last one hundred years. The position requires dignity, restraint, diplomacy, due respect and keen knowledge of our laws, the utmost protection of the U.S. Constitution and the Bill Of Rights and strict adherence to the oath of office which the President has sworn to uphold.

So, what do we have? We have a president who was just recently fined two million dollars for theft of charitable contributions and the mismanagement of his very own Trump Family Foundation.  President Trump is no longer allowed by law to participate in any charitable organization. While in office, our president also paid out twenty-four million in an out-of-court settlement to students who were scammed by President Trump's Trump University. We have a president who made a deal to pay hush money to both a porn star and a former Playboy magazine model using campaign contributions  - that is according to his long time friend and personal lawyer. Does this sound like somebody who would be serious about fighting corruption... in Ukraine?

President Trump's lack of respect for the Office of the President lets him lie to the American people about who's really paying for his new border wall, about releasing his taxes, about having done more than any other administration in U.S. history. Just this week he lied about the just released information contained in the Inspector General's report on the F.B.I.'s investigation of the Trump campaign. Do these and his many other lies (approx 13,000 since taking office) show respect for the Office of the President? Does having had a sexual relationship with a porn star while his third wife was pregnant with his fifth child bring dignity into the office of the President? Other nations are laughing at us like never before.

Can you imagine how we Americans would laugh out loud at N. Korean dictator Kim Jong Un, or V. Putin or even Prince Charles if either had tweeted out a picture of his own head photo-shopped onto a movie poster version of Rocky Balboa's body in an effort to show good health? "Hilarious! That Kim Jong Un is insane! Ha ha ha!"  Yes, President Trump tweeted just that image. I agree, the tweeting of the manipulated photo with his head on Rocky's muscular body is something eleven or twelve year old males would find really clever, but the President? Of the United States?  President Barack Hussein Obama never lowered the Office of the President to such childhood fantasies to communicate anything...ever. And the second photo-shopped pic Trump tweeted out recently was of Trump's head attached to the body of Marvel Comics character 'Thanos' which is an especially disturbing choice because of Thanos' super-villain character being deadly evil with the ability to turn half of a planet's population into dust with a snap of the fingers. So, along with the world's autocrats, add these to who Trump admires and fantasizes about, powerful fictional characters that are the wannabe idols of adolescent males. Certainly Time magazine's Person Of The Year, sixteen year old climate activist Greta Thunberg, is not the idol of most American adolescent males either. She is far too serious about very serious things and well-regarded by mostly serious people. Not surprising, the award-envious occupant of the Office of the President of the United States sent out this tweet on December 12th about the Asperger's diagnosed sixteen year old: "Greta must work on her Anger Management problem, then go to a good old fashioned movie with a friend! Chill Greta, Chill!".  Wow, that's our President!  What a guy!

We have a current occupant of the Oval Office who says that all of his female accusers are lying, the I.G. is lying under oath, the many ambassadors are lying under oath, VP Pence's assistant is lying under oath, Special Prosecutor Robert Mueller is lying, all of the news media are lying. Seriously, THAT guy wants you to believe him... It's incredibly sad for our country that we have so many over-entertained and under-informed voters who still support him.