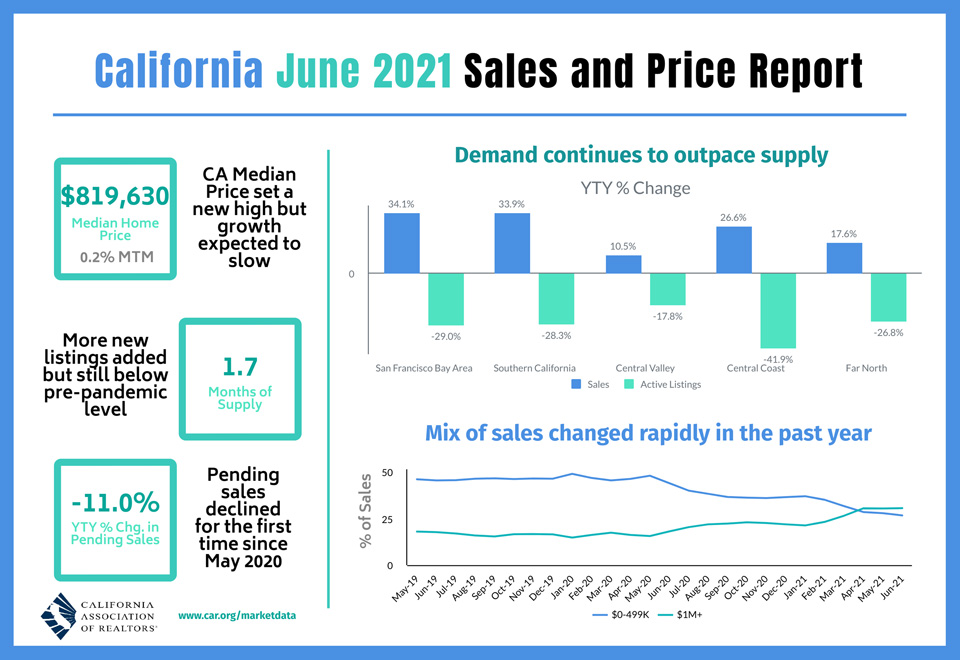 July 19, 2021 - LOS ANGELES – Despite an impressive performance in the first six months of the year, the market momentum appears to be moderating with existing home sales dipping for the second month in a row, the CALIFORNIA ASSOCIATION OF REALTORS® (C.A.R.) said last Friday.

Closed escrow sales of existing, single-family detached homes in California totaled a seasonally adjusted annualized rate of 436,020 in June, according to information collected by C.A.R. from more than 90 local REALTOR® associations and MLSs statewide. The statewide annualized sales figure represents what would be the total number of homes sold during 2021 if sales maintained the June pace throughout the year. It is adjusted to account for seasonal factors that typically influence home sales.

June home sales dipped 2.2 percent on a monthly basis from 445,660 in May but were up 28.3% percent from a year ago, when 339,910 homes were sold on an annualized basis. With strong sales growth in June, the state housing market ended the first half of the year with a year-to-date increase of 33.6 percent. Higher-priced markets continued to do well while sales of lower-priced properties remained below last year’s levels.

“We’re starting to see what a difference just a slight uptick in inventory and listings can do to help lessen the buying frenzy and create a sense of normalcy,” said C.A.R. President Dave Walsh. “The market is still extremely competitive, with 70 percent of homes selling above list price; however, the number of new listings increased in June, and both the share of listings with a reduced price and median reduction amount increased, giving buyers more opportunities to purchase.”

California’s median home price set a new record high for the fourth straight month in June as the median price slightly increased 0.2 percent on a month-to-month basis to $819,630 in June, up from May’s $818,260 and up 30.9% from the $626,170 recorded last June. The median price in California also remained above the $800,000 benchmark for the third consecutive month.

The pace of growth in home prices appeared to be decelerating, however, as the change between May and June remained below one percent, and the increase was the smallest in the past four months.  On a month-to-month basis, the statewide median price increase in June 2021 was slightly below the average May-to-June growth rate of 1.0 percent observed between 1979 and 2020.

“On a year-over-year basis, the statewide median price increased more than 30 percent for the third consecutive month. Tight supply, low rates and the change in the mix of sales continue to be the primary factors pushing up home prices to record levels,” said C.A.R. Vice President and Chief Economist Jordan Levine. "However, we are expecting price growth to slow from this point on as the top end of the market begins moderating. With pending sales down for the first time in 14 months, closed sales – which have been declined 5 out of the last 6 months – will likely remain lackluster as the market enters the second half of the year.”

Other key points from C.A.R.’s June 2021 resale housing report include:

Note: The MLS median price and sales data in the table below are generated from a survey of more than 90 associations of REALTORS® throughout the state, and represent statistics of existing single-family detached homes only. sales data are not adjusted to account for seasonal factors that can influence home sales. Movements in sales prices should not be interpreted as changes in the cost of a standard home. Median prices can be influenced by changes in cost, as well as changes in the characteristics and the size of homes sold. Due to the low sales volume in some areas, median price changes may exhibit unusual fluctuation.